HomeAnswerNotifications
X
HomeAnswerNotificationsCustomize Feeds
HOME→QUESTION
Ramela
Question asked on musing 13 months ago
Have you at any point possessed the capacity to fix your own fear? How?
This inquiries is requesting individual experience, not arrangements one have known about or perused from the Internet.
$0.01

Some fears I have been able to overcome out of sheer will and determination; others I am still struggling to combat, mostly because the source of the fear may not be clear even to myself.

I grew up in a small Venezuelan town where the supernatural was assumed as true, powerful and ubiquitous. I grew up feeling afraid of the dark, of certain animals, of certain people, and basically suspicious of most routine actions or activities. In a culture where witchery and the evil eye is assumed as responsible for most bad things that happen to people or that the right ritual at the right time can be the cause of your success, it is very difficult to become a healthy adult unless you decide consciously to renounce part of your culture.

I remember staying alone at home and hearing voices, noises and seeing terrifying shapes take form and invade my spaces. I vividly remember one of those nights and running like crazy out of the house because I was sure some kind of evil spirit was accosting me. You tell that to adults who also believe in the supernatural and you never get over those fears. They will find ways to reinforce them instead.

Thus, I decide that I needed to work on those fears on my own. I started to touch frogs and toads (cursed animals used on most demonic rituals, said to be responsible for the death of dozens of people every year). I’m not talking about poisonous amphibians, but of regular, harmless ones. I learned to study them. I research them; I try to look for as many types as possible so that I could see the difference. The huge, warty ones, I stayed away from, not out of fear but out of respect and disgust, since I learned that they had some defense mechanisms that can be very disgusting and even dangerous.

I did the same with snakes, another cursed animal, stereotyped in every horror tale going back to biblical times. I learned to distinguished the poisonous ones from the “house cleaners” (as we called them because they helped get rid of some pests). Thus education did it for me. Knowledge is power. After that if someone found a frog or a snake they would call me to get rid of them.

With the fear of spirits and other apparitions I just did some mental exercises. I would gather a series of self-assertive phrases, I would repeat to myself and I would try to find the source of the noises or shadows to reaffirm my conviction that all was in my mind, the result of my scared imagination. That worked after some time. That, along with a determination to study as much as I could about the history of witchery and superstitions, and by contrasting what people said were cause and effect of certain events with facts. Logic was my best ally.

Whenever I was told that a certain place was full of ghosts and nobody dared to enter, I’d gather courage to enter those places and confirm they were ghosts-less. If I was told that a certain old lady, accused of witchery, had all kinds of terrifying secrets in their houses, I’d find ways to visit them to verify their depravity. Most of the time, I was met only by the apprehension of those who know themselves rejected and marked by the stench of poverty.

I have always shied away from my fears.

I felt they were bigger than me, could crumble me and hence should be avoided.

But I realized, that the more I ran away, the more fearful I became and the more stronger my fears became.

Most of the time, my fears grew so strong that they overpowered and over shadowed me.

This has always been the case until I decided it was enough. I got tired of not being able to do the things I had admired or dreamed of doing because of fear.

So I read a book or more on the mind-how it works and all.

Whenever my fears said, Juliet, you can't do this, you will fall, you will fail, I will continuously speak positive words back and work towards conquering that fear.

I stood up to overcome my fears. It wasn't easy as I was let down several times but I began doing what I was scared of doing initially and in no time, I had gained mastery over that fear. 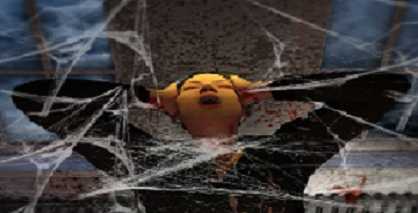 Now, the response I have written above is for those psychological fears that we create ourselves. The ones that we create inside ourselves but are not shared by other people. They are fears we create through our thinking. For example, my youngest daughter has decided (quite stubbornly) to be afraid of spiders. She has no real reason to be afraid. There is no real threat to her safety by the spiders she comes across. We don't live in a country where any of the spiders are poisonous or dangerous in any way. But she insists on becoming a gibbering wreck whenever she sees a spider.

The funny thing is, well at least to me, is that she is quite comfortable for me to deal with the said spider and get rid of it. Surely, if there was any real danger then I wouldn't be able to casually get a beaker and a piece of card, capture the spider and then remove it from her vicinity. This thing that is so 'terrifying' to her is easily dealt with. This wouldn't be the case with something that is not psychological but was in fact a real threat.

I would not be happy to fix fear if there was a real threat to either myself or any of my family. Then I'd want the flight or fight response to kick in so I could act accordingly. For this, I am grateful that our biological responses are immediate and we tend to act in the best way for our survival. This biological response can also bring about the third reaction which is to freeze, a bit like a possum playing dead. Each of these reactions are very little to do with any reasoned thinking. They are intuitive and dependant on the situation. And you hope you survive.

I'm guessing, you were only asking about fixing psychological fear, and so as I said above anyone can do it. You start with your thinking. Once you know that your fear is thought-based and not real, it is easier to work with it, fixing it and letting it go.

I try as much as possible to fix my own fears, reason being that no one will do that for me except myself.

It takes courage and determination to fix one's fears. Taking one's fear to God in prayer is the best one can do because there is nothing that is impossible for God to do. So to my knowledge, He is ever ready to take care of our problems. We should not be scared to be truthful because it pays us.

Our biggest fears can be overcomed if only we take it to God. I don't think we can overcome our fears on our own because if we were capable then it would not appear as a form or FEAR to us. Eradicating our fears is an easy task when we are prayerful and posses the courage it takes for us to overcome them.

When we posses the determination and courage to overcome fear, then it is a done deal.

Fear play a role in our personality and it isn't something that we can totally fix. There are times that I can deal with it while there are also times when I just have to refrain from tackling it.

All of us have our own fair share of fears / phobia, and neither of it can be eliminated out of us. It could be rooted to our past unpleasant experiences in life and it brought a deep scar to our mind & emotion.

But how do we even fight fear?

One of the ways is to not even fight against it, acceptance is the key in opening our eyes in looking through the "fear" within us. Our denial of it will only bring us more anxiety about it. With that, we are also denying ourselves about the ways the resolve it.

$0.74
Reply
RECOMMENDED
How can I earn from musing because am new here?What is your perspective on human cloning?Do you share your passwords to your wife/husband? If yes, Why?If no, Why?Are Natural Forests Beneficial To Mankind; How?WILL you join a Steem contest which rewards winners with SP delegation instead of giving out Steem directly? HOW MUCH SP and HOW LONG the delegation duration will attract you to join the contest?Are Traditional Rullers (Monarchy) still relevant in this modern world; Would you want your King Dethroned?What's a common bad habit that you've successfully avoided in life?Why do you think some people become criminals?What is the best thing that happened to you in steemit?How gambling destroys lives?