To perfectly sum it all up into a single picture: 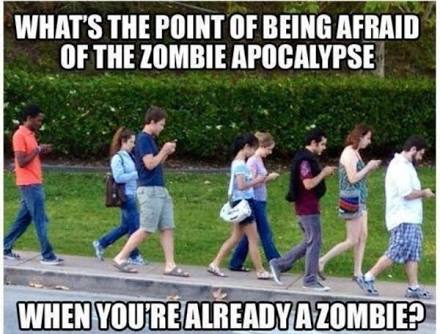 While it is no denying that technology helped better society by attempting to simplify basic human tasks and connect people more easily. It is also because of these things where the negatives are coming from. Technology is slowly dehumanizing society.

Before smartphones were invented people actually talk. Society really took the time to know what's happening around their neighbourhood. Kids used to play outside, running and playing with other kids. But the moment they were introduced to technology it's like they were instantly absorbed to it. They were so attached to technology that they are ignoring their surroundings. People now live and play online. So yeah, one negative effect is it makes human zombies. It is slowly dehumanizing society.

$1.68
Reply
RECOMMENDED
Why are Christians so scared of death when it's their route to heaven?What Really Happens After Death?Wen is it okay to decide to marry as a Man?What is the most cost effective way to make free electric energy?What's your take on steem politics? Is it transparent enough?What do you think about the use of crypto for betting?Is your city going cashless?How to fight corruption in our countries?How can a person forgets everything easily?Have you ever been in the hardest position in your life?