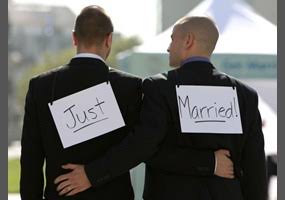 Homosexuality is a bad act which is now very common around the world whereby some countries made it legal with irrelevant verdict or proof. I am not really astonished about such existence because this is likely one of the signs of the last hour.

Gay marriages shouldn't be encouraged from my perspective because it doesn't show good moral conduct and it also against the rule of nature. There are more ladies and women around the world more than men, what should happen to the ladies if men keep having such kind of immoral relationship with themselves? How do we develop the population of our community or country if homosexuality prevails?

What type of impression are we giving to the coming generations?

Homosexuality is a great sin from all religions because no religion supports such a terrible act!.. Then why should we always go against the rule of nature just because we want to be civilized or unique in some aspect. During the early years, such detestable act was not common and they all lived a comfortable and peaceful lives compared to ours.

In conclusion, I think such marriages shouldn't be encouraged and proper education should be given to anyone who may be involved in such act.

The only misgivings are the Bad gay people that over exagerate their "Situation". Anyone can do whatever they want. We are in a free World and that's the proof of it. Step by Step a free World. It's just that we don't get to decide wich steps goes first ^^.

$0.00
Reply
RECOMMENDED
Do you believe that babies cry with a loud lament because they are disturbed by shaitan?The world would be a better place without religions. Do you agree or disagree?What can be used to create a steemit account without a phone number?What's something you wish you could say to your dad?How can one use Steem power on steemit to earn more steem?If you could play the fortune teller for a minute, what would be your predictions for 2019?What are the ways to effectively divert your thoughts when having a creative block?Do you think Horror movies can affect us psychologically?What do you feel when people start discussing about their New Year resolutions?Do you think that certain places on our planet have a special kind of power? As for example Stonehenge in Britain or the pyramidsmin Egypt?