Of course they do. Although I am not 100% certain that they all do. But come on, they are still humans with flesh and blood. They would obviously have the urge at times. The only difference is that they may not be able to express that urge by carrying out sexual activities.

You’d have to ask one of the few who HAVEN’T been busted for molesting boys...

Of course they do have urge.. They are human, aren't they? But since they have chosen this lifestyle, they will have to face the challenge of controlling themselves.

I hear stories of Reverend fathers molesting kids, some of them keep secret relationships while some of them father secret babies, this is to show you that they have urges to just like every man. But they have a burden of self control to bear.

A person who is 'asexual' doesn't have any sexual feelings or desires but I doubt that most (or even many) of the Priests in the Catholic Church are asexual. 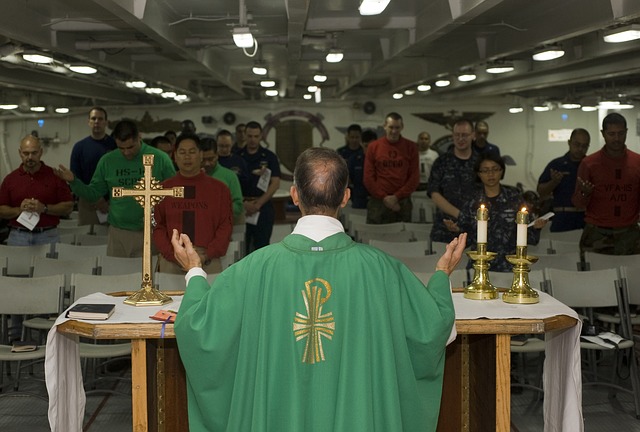 Some of the Priests might be trying to force asexuality upon themselves but the denial of their own lust has caused a good amount of Priests to go overboard and molest innocent children.

I am not a psychologist but I do believe that suppressing our true thoughts, desires and emotions can cause abnormalities in our mental health over the long-run.

Here is a list of the child sexual abuse cases committed by the Church:

The urge for sex is natural, it does not matter whether you are a reverend father or not.

But Reverend father have so master the act of suppressing the urge with their dedication to worship of God which make some people assumed they don't have the urge for sex.

Biologically, as long as a person those sex hormone the urge us sure, but can be suppressed.

Being a celibate is a decision of the mind one has taken and does not in any way hinder the biological process of a healthy man. So if the reverent Father is not an impotent, then there is a 99% possibility that they still does have urges for sex but then the oath and self discipline is what stand as their precaution .

It's in the nature of men to find women attractive, this is a natural cause and can not be changed except if the person was born a celibate .

According to Wikipedia, Celibacy is the state of voluntarily being unmarried, sexually abstinent, or both, usually for religious reasons... link text

As far as I'm concerned, Priests are humans and sexual urge is one of the features of every normal human being. The fact that they chose to be celibate doesn't mean that part of them will cease to exist. The act of celibacy could be likened to the act of fasting, that is, abstaining from all sort of foods and drinks especially for the purpose of religious observance. This doesn't mean the person fasting would not be HUNGRY - fasting doesn't take away the urge for food.

Please do not hesitate to refer anyone you know even if it is a clergy that does not have sexual urge to the nearest hospital.

I don't think a lot of people who choose to be celibate have urges that they find difficult to manage, at least if they're normal heterosexuals able to get their sexual needs met in marriage even in conservative societies. From what I've read, if you're celibate for a long time, your sexual urges get easier to manage and tend to weaken. Some people say it's possible to weaken them a lot by meditation. Aging alone will weaken a man's sexual urges a lot. A healthy man in his forties is normally a lot less horny than in his teens or twenties, which is a good thing because age taking the edge off one's sexual urges is conducive to a clearer understanding of things.

Yes, of course. Reverend Fathers, you call, or Priests are still human. Even if they made their vow of Celibacy, it does not mean they forget about their being human.

What most people think is that after a priest is ordained, they are not allowed to do what we ordinary people can do. Actually, what they are not only allowed is to marry and to have sexual relations, which is what CELIBACY means. The fact that they chose to be celibate does not mean that their animalistic behavior will cease to exist.

Also, Celibacy is similar to Fasting where we abstain from any food or drinks, be it for religious or medical reasons. But, does it mean the person Fasting will not go Hungry?

For me, it is not a sin having a sexual urge. Everyone experiences it, even animals. It only becomes a sin when you do an immoral thing to satisfy that urge.

Why won't they? They are human after all. The issue is how they choose to handle the urge or how they deal with it.

Now let me not start on the naughty stories i have heard about them, and the ones i have seen. As they are servant's of God, i choose to. Spare the details.

Ofcourse they do.They are men born of women so yeah they have sexual urges that are usually the result of sexual hormones testerone firing up.

Also we are driven by the laws of nature to procreate not every one can go against nature by swearing off sex and expect to come out of it victorious.It takes a man with exceptional resolve to not be moved by a woman that is pleasing to the eyes.

The mind can stop any urges if it is kept sane and pure.

So, I would rather say not but not from a reverend perspective.

$0.01
Reply
1 Comment
RECOMMENDED
Which route of administration of medicine is currently the most effective to combat diseases?Are the tests the best way to prove your knowledge?What are the signs of poor management in the company?Is it possible to recover one's STEEMIT account should that person lose his or her password?Is vatican city a developing country?How useful are internships to the success of students?What is musing all about and what has musing help you guys achieve and also steemit and musing blog which of them do you like most if musing tell me why same goes to steemit ?What are the signs of prostate cancer?Does the distance between the earth and the outer space end up at a point?Can ticks live and spread in gardens (grass)?