Well as far as old TV shows go, I'm going to have to go with Merlin!!! I honestly haven't seen a better re-enactment of the age old story of Camelot and the great king Arthur and it really doesn't get better than Merlin.

I can still remember when Merlin first got to Camelot and used his magic to move a chair from one side of the room to another in order to save Gaius's life when he slipped and fell from the top floor of his study. I literally binge watched all the seasons with my siblings and it was absolutely epic!!!

I remember the spell for unlocking doors and locks and sometimes when I don't have a key to a door or I'm waiting on my family to get back and open the door to the house for me I just might walk up to the door and say "Tospringe"!!

The show itself had an excellent character line up and storyline, I mean who would have guessed that Morgana would eventually become the ultimate bad guy?? As of when I watched it I was really young and not well versed in the lore of Camelot, King Arthur and Merlin in general so it never occurred to me that she'd become the bad guy.

Oh and there's the brotherhood/friendship that existed between Merlin and Arthur which started off terribly but grew into one of the best bromances I've seen on TV. It literally broke my heart when Arthur only found out about Merlin's powers as he drew his last breaths. The beautiful thing about it was that at the very least he was able to tell Merlin that he understands now and actually thanked him.

The show was great and it had so many twists and turns in the storyline that every episode kept me and my siblings glued to the screen. I mean Merlin even became a Dragon Lord?!! It doesn't get any cooler than being a dragon Lord!! I'm sure he could take control of Daenerys Targaryians dragons if he got dropped in the game of thrones universe!!

The show was a work of art and if I could find a way to watch it from start to finish I'd gladly do it. The cast, the storyline, the cliffhangers, it was all a masterpiece. 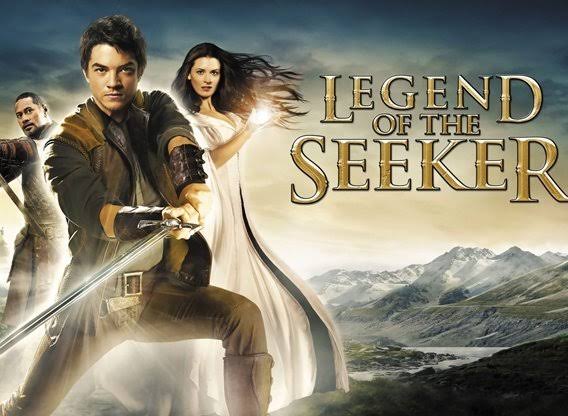 This definitely has to be the legend of the seeker, I saw this series in 2008 when it was newly released, till now it's totally still evergreen even when the show was canceled after fourty four episode and only two seasons, my friend and I waited for the thirds season to be released then on syfy when in the summer of march 2010 we learnt that the show has been canceled.

The plot of the seeker definitely amazing Terry Goodkind who was the lead writer/developer took time to spell bind the viewers with an awesome storyline which saw a man Richard Cypher fulfill his destiny by becoming the true seeker.

In order to do this, he had the help of the wizard zeediccus Zul Zorander and Kahla who helped him fulfill his destiny, the most thrilling part was when the underworld's rift was torn apart and deadly demons came out from under the earth in other to torment humanity.

The real villain darken rahl was a cool man, just like Heath ledger was born to play the joker in dark knight, he was a major villain but people still loved him, that's what I think of Craig Parker who played darken Rahl he was that kind of actor that was born for the evil role as being a tyrant who tormented the earth while be was alive and also tormented the earth too in his spirit form while he was alive as well.

I love the romance between Richard Cypher and kahlan even when it was destined that they would fall in love, it was also destined that if they fall in love they will end up becoming each other's bane and end up destroying themselves which for me is a comedy of errors or what I term as a ironic twist of fate. It's still a beautiful show and I hope it can come back on air maybe on Netflix or AMC because it is still interesting to me even after ten years

To be honest I would really go for Friends

The fun and the bonds between friends in the characters of the TV Show really made me to keep it in the top list of my all time Watchable TV show .

Every episode has a little story behind it and every character is attached to it in some or other. The comic timing and the scenarios made every minute of the Show kept me entertaining and I did passed my time watching all the season of it.

If I get some time I do watch some fun parts from the season from time to time.

It was kind of heat breaking when I was watching the last episode of FRIENDS.

There are indeed quite a lot but this one is the best from my point of view.

If I have to choose only one, then it would be the classic sitcom F.R.I.E.N.D.S.

I am a big fan of situational comedy and this show was what brought me to love the sitcom genre. Even right now I am still watching some re-runs of the show on Warner TV and is still loving it. It's probably the only tv series where I have watched some episodes over 10 times already.

My favorite old TV series are Dynasty and Dallas. You could see everything there: beautiful men and women, power fighting, sandals, corruption ... It was all there.

$0.00
Reply
RECOMMENDED
What should matter most to us in life?On a scale from 1 to 10 how insightful and and interesting(meaningful) do you find the questions(all of them) on musing? Can you explain why?How did you know your spouse was cheating on you?What's your favourite car and why?Do you agree that steem is undervalued?How can you make friends with people when the people where you live are rude? This question previously had details. They are now in a comment. Answer 694 Follow Request More Ad by EveryStudent.com How can I find God? This explains how you can begin a personal relationship with God right now. Learn More 100+ ANSWERS Saad Ghazipura Saad Ghazipura, Experience creator, memory maker. Answered May 7, 2013 Continue Reading?What is the most beautiful compliment you ever received?How would life be without religion?Would you rather be held in high regard by your parents or your friends?Why do adult children disrespect their mothers?