Probably the most frequently asked question in all martial arts history :) Mentioning history, let me take you to 1993

People have been fascinated by this questions forever. There have been never ending discussions about one punch knockouts, power of mind or touch of death techniques. In 1993, a brazilian named Rorion Gracie decided to organize one night event where 8 fighters would fight each other in the tournament style to decide which martial art is the best one. Every fighter has been a master/black belt in his special art. Boxing, kickboxing, sumo, wrestling, jiu-jitsu or karate. 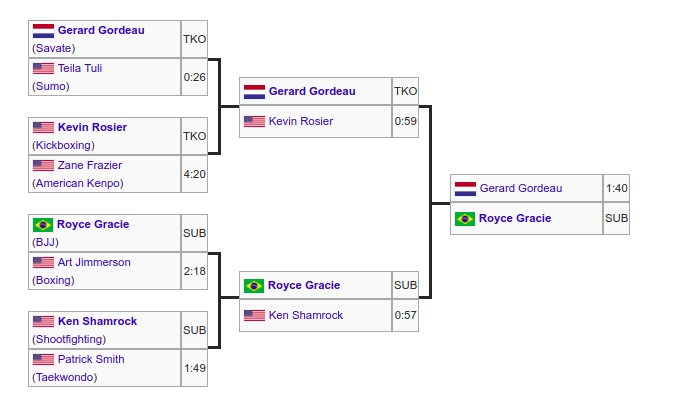 You see that the winner is named Royce Gracie. If you're reading carefully, you realize I've already mentioned this surname. Yes - he's a family with the organizer of this event. Member of Gracie family.

When Japan tried to conquer Brazil in 1930s, they brough to brazil also jiu-jitsu. After several years, when they decided to cancel the "mission", 3 brothers who undertook a training under japanese jiu-jitsu blackbelt Maeda were left without their sensei. And that's how the looong 50years of reinventing jiu-jitsu started. Gracie family became obsessed with jiu-jitsu and based on 3 years of training of these three brothers, they've came up with the modified version - Brazilian Jiu Jitsu. Compared to most of the martial arts, it's not about punching and kicking but about taking the opponent to the ground and neutralizing him, showing him your superiority and possibly breaking some of his joints or choking him unconscious. Huge advantage of jiu-jitsu compared to other martial arts was, that they never experienced a second of fighting on the ground as the rules of their sports prohibited it. All these karate guys could be blackbelts when fighting standing, but once on the ground, they were first day beginners.

While the whole world was endulging in mostly boxing matches, in Brazil a new phenomenon was brewing - vale tudo or "no holds barred" fights. Everything allowed. And who was ruling these fights - yepp, you guess it right :) Gracie family.

On the picture is shown  a typical vale tudo fight scenario when Gracie family member fought. Take opponent to the ground

They proved it over and over again, that taking opponent to the ground is the most effective way to win the fight. That also showed to be true in 1993, when Royce Gracie finished all 3 other blackbelt specialists in one night and without a mark on his face changed the world of martial arts forever.

Jiu-jitsu as a world phenomenon

Obviously, the downside of jiu jitsu is facing multiple opponents. Taking one of them to the ground would cause being soccer kicked into the head. That's why for street fight situation against multiple opponents, the best martial art is ...sprint :) And if not sprint, any striking proven martial arts (in real fighting situations - e.g. MMA) like thaiboxing or even classic boxing should earn you enough respect to protect yourself.

But if you're facing only one opponent, it's important to realize that kicking or hitting him in the head could cause him trauma and potential life-long problems. That's why jiu-jitsu once again come into play. Taking your opponent down to the ground and showing him your absolute superiority till he calms down is the best way how to end the situation quick and without injuring yourself or your opponent.

That's why my answer is brazilian jiu-jitsu against one opponent and running away against multiple opponents ;)

There is no one style that beats all. The ability to overcome is in the ability to adapt what you know to suit a different situation. This is the same for all parts of life.

The best fighter of one art can beat the best of another, and then a third beat the first and the second beat the third, This does not make one better than the other, it just shows the weakness against another style and the strength against another.

Limiting yourself to just one style limits the combat technique you can use, Being open to other possibilities, removes the prediction of movement and enables you to counter in a greater variety of method.

I think the most effective martial art is boxing. But I think if you combine a martial art with intelligence, you'll be more effective.

RECOMMENDED
What causes divorce in marriages?When drafting your questions, do you consider the type of people who use this app and the knowledge they posses?How do you deal with imperfection?Would you say there's a bias with God ?Can you date your friend ex-gf cos you love each other? ?Do you still buy DVDs to watch movies or you just watch movies online?How is it possible for a steemit account with 72 rep all time earnings should be only 146sp ?What do you think about wallet spam on Steemit? Can that be controlled somehow?Why Corruption Thrives?Do you think it is a good idea to borrow money from a friend? Why or why not?