A Medium-looking front-end Dapp built on the Steem blockchain. 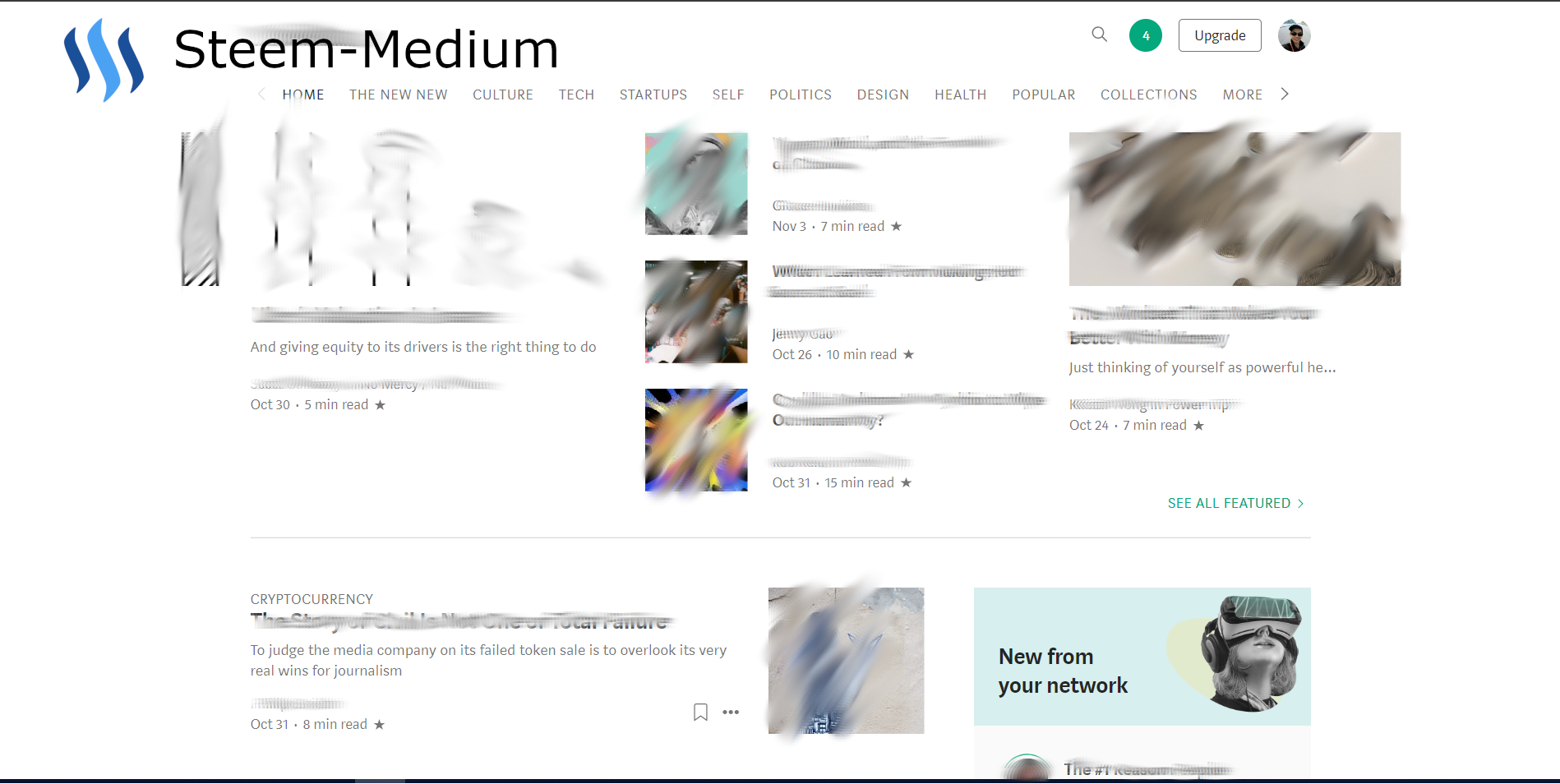 Medium is a  writing platform that's neutral and censorship resistant, Governments can still subpoena the website or send cease-and-desist letters to them, but as proven during the 2016 Malaysia 1MDB scandal, Medium has not budged when foreign governments pressure them to shut down someone's article without court-orders.

As of 2017, they have 60 Million monthly page visits their whole business model revolves around subscription and revenue sharing based on "claps". As readers you can read articles there for free, but will need to pay $5 monthly to access "Locked posts", usually exclusive content of higher quality.  "clapping" on an locked posts means you are telling Medium to allocate a portion of your $5 to the author of the post. With Medium taking a cut to keep the lights on and employees fed.

Why is there a need for a Medium Front-end:

Medium.com, for all its promise of fair revenue sharing and neutrality, is ultimately still a centrally-held company based in the United States of America, Their servers are easily shut down and domain name easily taken away. While this has not happened to Medium.com it has happened to a social media operating on a similar modus operandi, Gab.ai, was shutdown through political pressure to their domain name provider and server host GoDaddy.com. This is because Gab.ai tries to be a Twitter but with MUCH MUCH more freedom and less political control.

One look at Medium.com and you can see their comparison with the Steem blockchain. If Bitcoin was what Paypal tried to be, then Steem is what Medium is trying to become. Medium is hails themselves as the internet's last neutral ground, but even then, we know one day they're gonna give. At first maybe blocking horrific hate speeches, doing things that are mostly justifiable, and then slowly like Facebook, Reddit and Twitter, they will police every posts uploaded. It's not a matter of if, just when.

Why a Steem Dapp:

I will explain this by comparing the strong points and weak points of Medium to Steem.

Design - Ever since Day 1, Medium was created with Design in mind.  The Founder of Medium, Evan Williams already has an impressive retinue of past experience including Blogger and Twitter. Medium is designed in a way that makes reading so much more comfortable than any other UI.

I haven't seen any writing platform that is as satisfying to read as Medium.com. 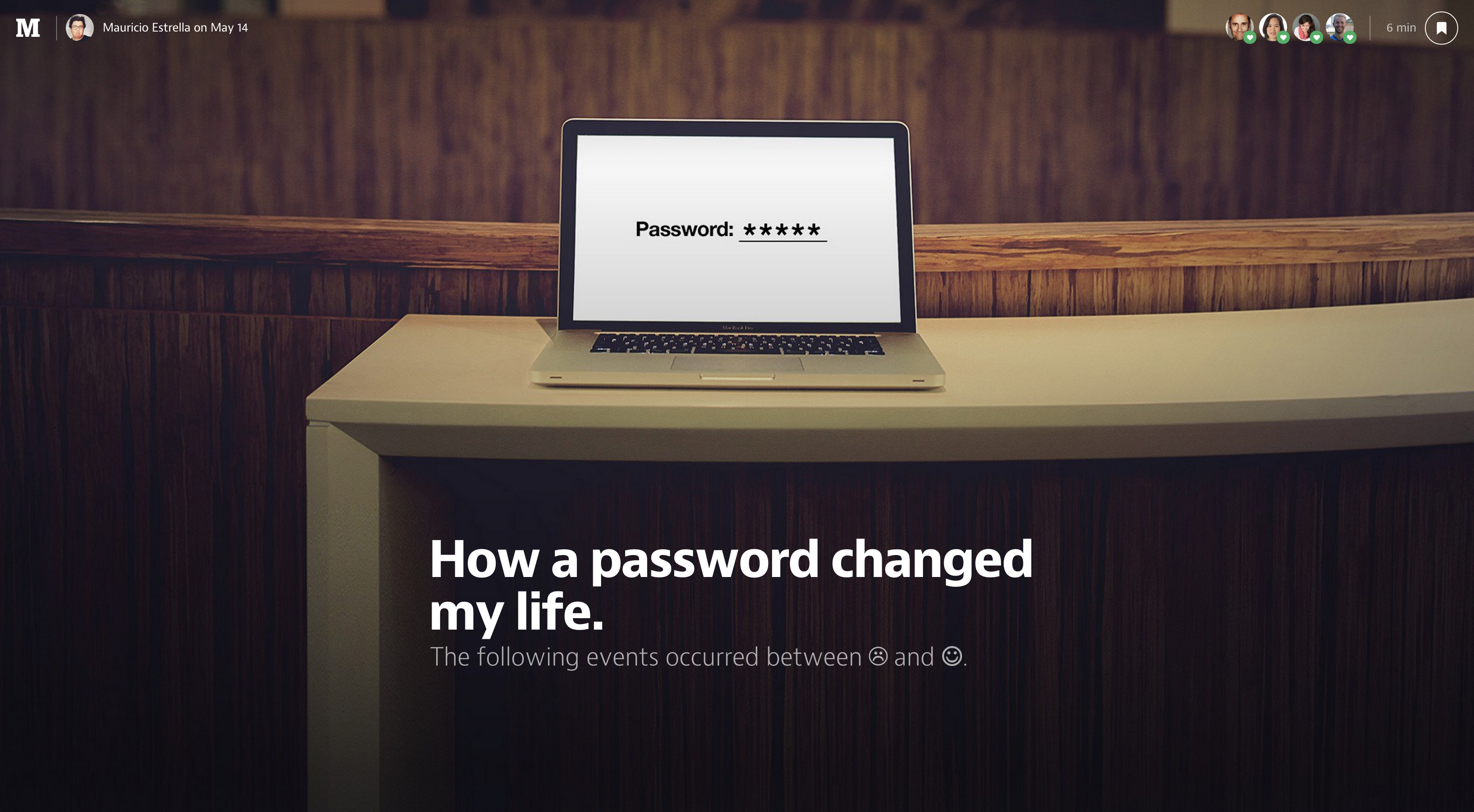 Revenue Sharing - This is Medium's weak point however, if compared to Steem. Anyone can be a subscriber on Medium.com with a $5 fee every month. Payable using Credit Card or Paypal. However if you want to make money writing for Medium though, you can only do it if you're in the US or "supported countries" using Stripe. So someone like me has to perform some legal blackmagic-fuckery to get an EU business licence, set up a business in Estonia as an E-resident for a fee, and then set up a Stripe account. Not exactly clear cut step and mind you, this will cost upwards of hundreds of Euro before i can even make a single cent off Medium.

Compared to Steem, Medium isnt exactly for everyone. Someone like me needs a significant investment to even qualify for their "Partner's Program". I can only imagine how much 100 Euro will cost a typical Guinean Steemian or Venezualean.

Steem posts are available for anyone to read (no locked-post BS) and anyone with Steem Power can reward post authors, there is no $5/month barrier of entry.

Being a Steem writer (and earning from Steem) is also instantly available. Granted, you need to earn enough to cash out. There is no barrier of entry to being a paid content creator on Steem too.

Centralization (aka no decentralization) - All of Medium's user uploaded articles are hosted on Medium, most likely in a single dedicated server. They surely have backups somewhere but ultimately it's controlled by Medium.com. It wont be too hard for the US to issue a warrant to close down Medium for whatever trivial reason.

Steemit.com however, is just a front end. Sure, it's also controlled by a US based company. But Steemit.com can close down and i still can go to busy.org to write and read Steem posts. If that got shut down I can go to SteemKr, Esteem, you name it.. The best defense is not an impenetrable fortress but a camp that can disappear at a moments notice. Similar to Bitcoin, governments will find it much harder to shut down the Steem Blockchain.  Best they can do is post flagging, which is a feature available for everyone - no special political power to anyone who is not a participant.

Steem blockchain already has excellent revenue sharing and decentralization. What most Dapps on Steem lack is design, which Medium.com has perfected. A marriage between Steem's backend and Medium's front end will (in my opinion) make the perfect politically-neutral writing platform.  Where everyone truly has the power of free speech regardless or geography and demography.

I am aware that Medium.com's code and designs are patented and copyrighted, but it should not be that hard to learn from their design philosophy and apply them to a Steem front end. Dapp.

Anyone who comes out with such a Dapp that's good enough will probably be the first project to finally break into the mainstream writer's space. 60 Million monthly page visits will find themselves being offered a similarly looking alternative with way better revenue sharing program and truly politically neutral platform.

1.Fiverrr for Steem - let's call it : Steemjobs
Majority of workers on Fiverr are from developing countries and doing micro tasks of digital nature ( ad creative /blog post/cartoons). We already have a lot of those folks on this platform and this would give them a meaningful way to contribute to the platform.

2.Gofundme for Steem - let's call it : SteemFunder
Steem community is all about giving/curating to worthy causes , I cannot think of a better dovetail for our platform.

3.Udemy for Steem- let's call it : SteemAcademy
At the heart of it Udemy and other education platforms are delivering content for customizaed curriculum , that's a done deal as far as I can tell.

4 Microloans for developing countries: Steembank / SteemLoans
What do you need for microloans ?

I am not a developer so I can't act on any of it but I hope that someone takes these and runs with them , I am sure the Steem community will support them to no end.

Excellent question and without a doubt in my mind, we desperately need a chat and messenger DApp.

Steemchat is basic and hardly used and most people use Discord but I can't understand why the conversation should be taken off chain. I personally think Discord is a messy confusing place and as such very rarely use it.

If any DEVS are reading this. A DECENT CHAT AND MESSENGER APP PLEASE !!

Great question and I will be interested to see the numerous other answers you will no doubt get :-)

It’s actually an app that I would build if I had the time but that’s unlikely to happen. So I’d love to see someone develop it so that I can at least participate in the reviews.

We already have a restaurant review app (@letseat) but one that exists specifically for beer and wine would be awesome.

And it would pair really well with Steemit food and drink competitions such as #beersaturday.

An app like this would be a great competitor for sites such as Yelp. Those sites have a huge user base so for people who use those sites to realise that they could get paid for doing something that they already do should be a huge draw card for them to jump on the Steem blockchain.

In all honesty I still find it kind of funny how many users here only dump their post on Steem and go hang out on Discord right after. We constantly preach and preach about engagement but most of our engagement really happens outside Steem more specifically on Discord. This is the daily basic routine of the majority of Steemians here!

So why not create a Discord-like DApp built on top of Steem? Get people rewarded for chatting and just hanging out!

I really do think that at the moment, Steem needs a way to directly contact other users privately. Not all people on Steem put their Discord/FB or other social media ID on their profile! And due to the spam memos we often receive from those promotional bots, a lot of people rarely check their wallet transfers anymore.

While I am aware of the Blockchain's immutability and openness to the general public, this can be solved by just a simple encryption method to which I think is the main purpose of those "memo keys". Use those Steem Developers in creating this Discord-like DApp! XD

That's a really excellent question. It would be easy to take a look at what centralized Web 2.0 apps exist and suggest them. But it is more interesting to try and come up with ways to use the blockchain that do not exist, yet.

I think what Steem needs is an app that enables posts to be private by encrypting them and managing the keys on the user's behalf. Of course, the app should not know the keys but it should provide an UI for easy management of locally stored private keys that enable the user to have detailed control over who to share the content of the private posts. The app could go a step further by making not only the content of the posts private but integrating tools for the user to create anonymous accounts. That way, you could work around the fact that everything on the blockchain is public.

RECOMMENDED
What was the most embarrassing moment of your life?Please, how to I stop my power down?What are the different ways to prevent migraine?How we get upvote in musing.io?It is best to select from where to add product to Steemhunt.?Why social media is becoming so addictive for everyone?How can I answer my own question on musing.io?Why google is only software in android phones pre installed?Who has information about how Fiverr works and their payment options?What is steem 2.0?