In Venezuela we have  several typical Christmas dishes we prepare or buy for the occasion.  Years ago, before the red disaster, any Venezuelan family would have a  bit of everything on their tables: hallacas, ham bread, chicken salad,  dulce de lechoza (green papaya preserves), and ponche de crema (an  egg-nut like alcoholic beverage). 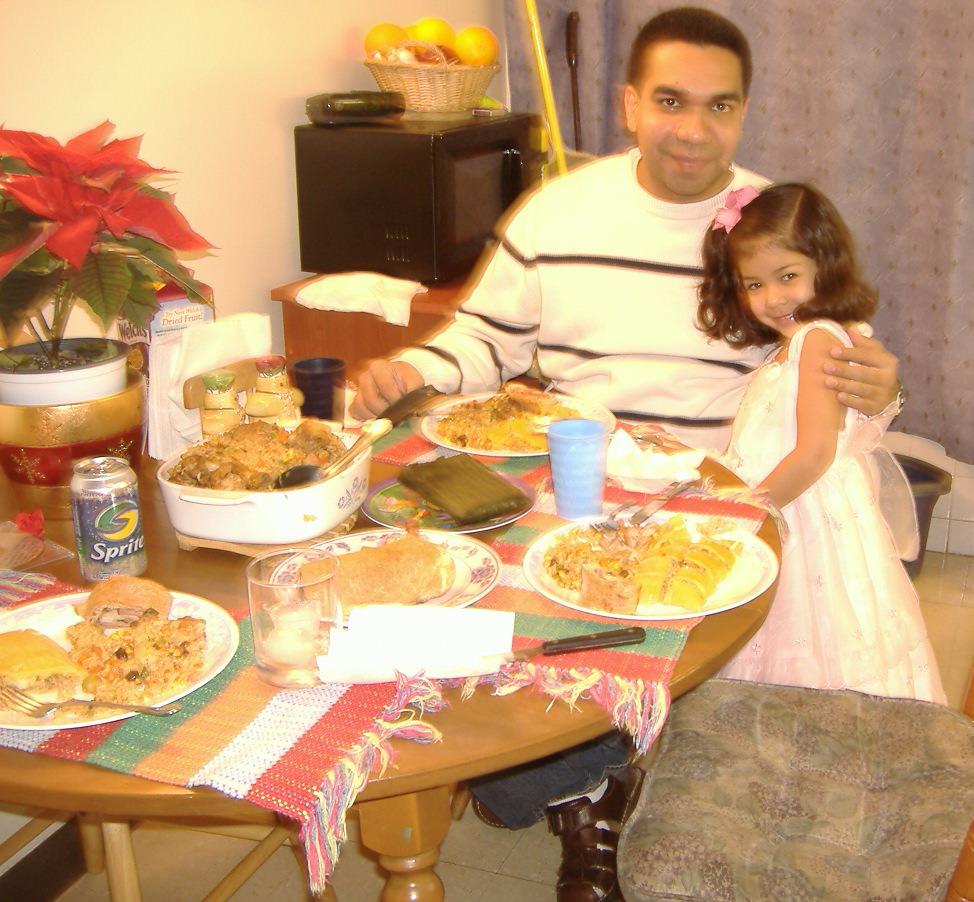 Now, we can call ourselves lucky if we can have either of those treats.

The hallacas are tamales-like rectangles made of corn flour dough and  filled with pork or chicken meat stew, adorned with olives, raisins,  onion and slices of boiled eggs. They are boiled wrapped in banana  leaves and tied with cords. They are served hot. A touch of hot sauce  may add some more taste.

The ham bread is a long loaf filled with ham, olives and raisins. It is heavy and juicy.

The chicken salad is similar to the Russian salad but it has shredded chicken, boiled carrots, mayo, and green peas.

The Dulce de Lechoza (green papaya preserves) is made with green papaya  slices soaked in water and baking soda, then boiled in molasses, and  cloves. It is served cold.

The Ponche de Crema is made of rum, condensed milk and eggs. It is served on the rocks, some cinnamon can be added.

The preparation of these meals, along with home decoration was a  family event. Everybody was involved and it was one of the few occasions  where the whole family, no matter how distant they were, united to have  a good time. Reconciliation of differences was part of the ritual.

Usually, this special dinner was served on Christmas and New Year’s  Eve. People dressed their best for the occasion and in the recent past  part of the traditions involved the purchasing of estrenos (new clothes)  for at least 3 days (Dec 24th, 25th and 31st). In the last 6 years very  few Venezuelans can say they have bought new clothes at all.

Hopefully, we’ll have some of these dishes. It is part of the act of  resistance and faith in the future. To give it all up would be to accept  defeat and resign ourselves to rot in revolution. 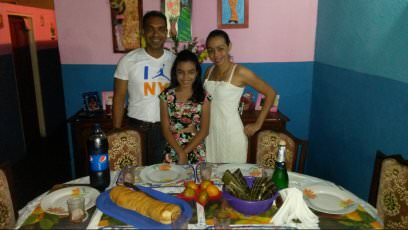 The hallacas and the chicken salad. They are delicious and can't be missed this Christmas! At home Christmas is a time when we try to be together and in family.  Normally we start preparing food from December 23rd. Hallacas are a kind of roll filled with meat and other things, and wrapped in banana leaf. It is the Christmas dish par excellence of Venezuelans. At home we agree and everyone does a part of the work: someone chops the meat and the dressing, another chops and cleans the leaves, another kneads and spreads the dough on the leaf. Then we all gather at a large table and begin to "make" the hallacas. All this with music and some drinks.  Generally you can make up to 100 hallacas to share at dinner and give to visitors who always come home. Chicken salad is a salad of potatoes, carrots, peas, chicken and mayonnaise! That's also done on the 23rd because the ideal is to eat it cold.

On the 24th, at 9 p.m., we set the table! We decorate it with fruits and flowers, there is also a lot of bread and nuts. We all sit around the table, and after thanking, we start tasting all the food.

This year will be very difficult for us at home (there are only women left) because the three men who were at home are gone: my father died two years ago and my brother and older nephew emigrated. Maybe we will have to eat more sweet so as not to cry and enjoy Christmas as we did every year.

Each country and each nation has it's own habits and traditions. I'm going to prepare stuffed cabbage, which is traditional for us. There are a lot of sweets I'm going to bake, like gingerbread with sugar glazing, loaf bread and Hungarian beigli.

However, I'm always trying to remember that even though we are celebration, eating healthy is very important. Even though it's Christmas, your stomach is the same size as it was the day before and you shouldn't eat more.  Balance is the key to everything, that's my motto.

I used to watch the news on TV and I remember during Christmas and Easter and see people ending up at the emergency room because of overeating and alcohol poisoning. These holidays are not about the food, but about being together and celebrating. So if I'm in charge, food is limited, no overeating ans wasting :)

I seldom cook or prepare something for Christmas. Whenever I do, there is one food that I usually or always prepare which is the cheese sticks.

It is very easy to do but it is time consuming since you will need to make a lot of it for everyone and not just one piece for each kind of food.

It is really delicious especilly when newly cooked or freshly made. You just need lumpia wrappers and cheese to make some cheese sticks.

The dip is also easy to prepare. It is just a combination of ketchup and mayonnaise.

Normally we eat the left overs from Christmas eve dinner. There is always loads and plenty for any visitors.

Normally there is a whole ham that has been glazed and we carve it as required. I am not a fan of Turkey so we normally have Chickens and a large leg of lamb.  I have never believed in the meat and two veg and we will have the 3 meats and about 6 types of vegetables plus a few different salads. Normally a large potato salad a curried rice and peach salad.

This will be served with a few different puddings such as a favorite of mine which is fresh peaches,nectarines and plums cooked in whisky served with ice cream. This is sensational and worth saving space for.

As you can see my family normally over caters , but surprisingly nothing goes to waste.

RECOMMENDED
Is it true that investment on the blockchain is a very profitable investment?Do you think teachers deserves to be paid more than other professions?What exactly is your perception of beauty?Is democracy really better than monarchy?Was Steemfest all based on lies or untolds?When does healing happen?Based on the value of steem right now, will you cash out or hodl?Does atheism destroy culture?Is cyber-bullying the major cause of depression among teenagers?How can addiction to television make a person become violent?