The Zcash Foundation has a budget to give grants to some side-projects and to do some PR work. In the future, it'll get more of a say in protocol upgrades, but it's a paper tiger. There's a Zcash forum, and Zooko has more than 50,000 Twitter followers, but there isn't an active Zcash community outside of these two organizations.

In a conflict, the foundation couldn't stand up to a company with Zooko Wilco, the founder of Zcash, as a full-time CEO (he doesn't contribute any code). The foundation has 6 employees, while the company has 26 employees. The foundation is governed by a Board of Directors who are big-name volunteers. They're busy with their day job, and they wouldn't be there if they weren't a fan of Zooko and the ECC.

Zcash development is funded by the Founders' Reward, also known as the dev tax. Until October 2020, miners only receive 80% of the new coins while the other 20% makes up the Founders' Reward. The lion's share goes to founders and vested employees. In practice, the foundation and the company depend on donations from these individuals to keep going. 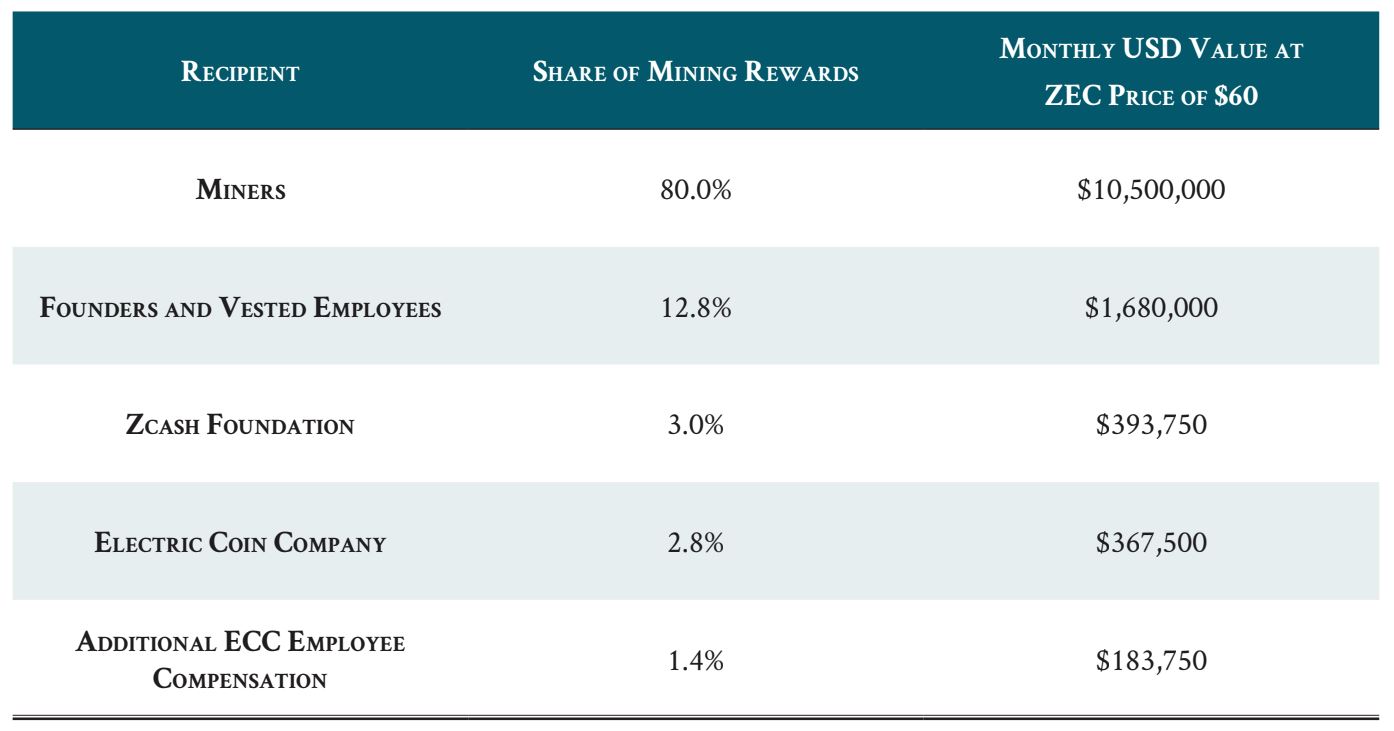 When the funding runs out in October 2020, the foundation will have a longer runway than the company. Will the Founders' Reward be extended anyway, in violation of what was promised originally to miners and buyers? That will be a test case of how decentralized Zcash governance is.

One former employee, Simon Liu, is suing the company for not giving him the stock options he claims were promised to him.

In June 2018, an external developer, Jane Mercer-Weiss (@radix42), threatened not to update the Zcash GUI wallet on Windows and Mac when she couldn't afford to pay for basic living expenses. Yes, you read that right: the company only created a command-line wallet at the time and depended on a volunteer to develop a graphical interface with a full node. Eventually, Monero's lead maintainer Riccardo Spagni (@fluffypony) paid her a year's salary without any strings attached. He wanted to support privacy, even in the form of a competing project with different technology and different values.

Next week, a 'friendly fork' called Ycash will be launched. It will try to go back to an ASIC-resistant mining algorithm, and it will lower the Founders' Reward to 5%, but keep it forever. Ycash is independent, but has been welcomed by Zooko. The foundation has been more critical. I suspect the ECC is friendly towards Ycash because it's a convenient way to get rid of dissidents, while creating a precedent for extending the dev tax. Or they suddenly remembered their cypherpunk idealism.

Disclaimer: I'm a toxic Monero fanboy. I enjoyed doing research for this answer, because I use the Chrome browser extension G-spot, which changes the word 'governance' to 'assplay' everywhere. At the moment, I own 0 ZEC and less than 1 XMR.

$0.60
Reply
RECOMMENDED
What is more important to a bird? Left wing or Right wing?What life lesson did you learn the hard way?What is the difference between living and existing?How do you deal with your introvert boyfriend if he will have tantrums?What is important - to love or be loved?How to become productive daily?What would you do if you would be given 100,000 Steem?How do you get paid on musing ?What is that thing you will never do in your life?Traffic congestion has become a serious issue. Will technology ever solve the traffic congestion problem?