There are different ways that witnesses motivate users to vote for them.

For example: https://www.steemhq.com/ pays a small amount to users who vote for their witness which is: https://steemd.com/@steemhq.witness

From their website: "All Steem earned from the witness will payed out once a month to all qualified accounts proportional to their Steempower minus a small fee." 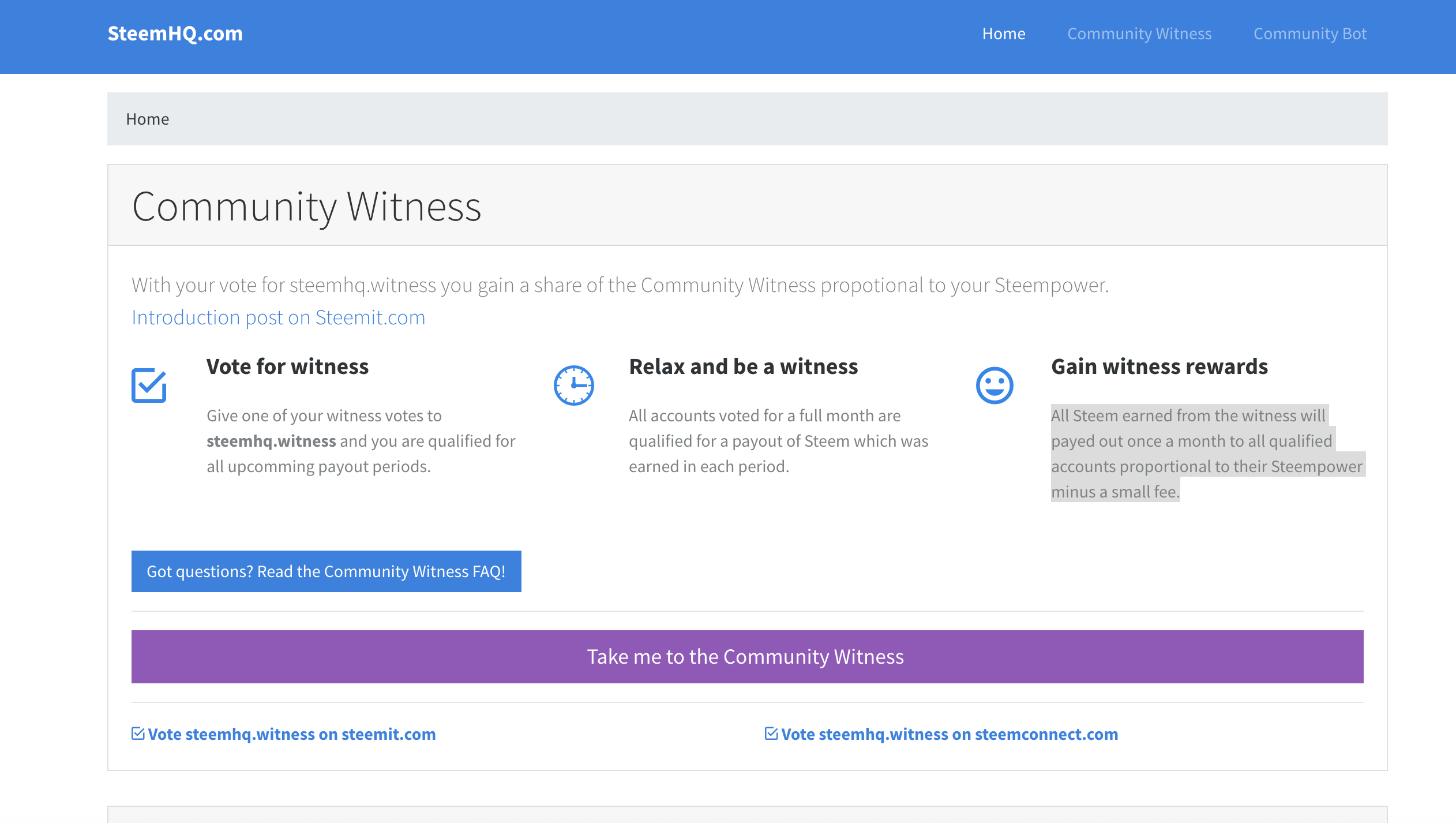 There are probably a few other witnesses that operate this way, but I don't know about them.

https://steemd.com/@isnochys used to pay out a small amount to people who voted for his witness, see here: it seems to have changed if I check the steemit profile now.

That being said the top witnesses feature in the steemit should really be fixed imo, that would fix a great deal of things.

To really answer your question:"Why should I vote a witness?"

But really nothing is forcing you to vote for a witness.

Witnesses are the governance of the Steem blockchain.

All decisions about the Steem blockchain, its mechanics, its future and for example how the rewards function are made by the Top 20 witnesses.

If tomorrow the SBD is truly pegged, that’s a decision only the witnesses can make.

If rewards are changed to 50% for creator and 50% for curators, that’s a decision only the witnesses can make.

The same applies to HardForks. The upcoming hardfork is not the decision of Steemit Inc, they prepared and released the code (in collaboration with witnesses, stakeholders, and community developers). But the acceptance of the HF is done by witnesses. If less than 2/3+1 witness deploy the HF on their server the HF is rejected. HardForks require super majority (2/3 + 1 vote).

The Steem community is a community owned and operated blockchain but the witnesses are its government.

Our witnesses are the reasons why we can transact in Steemit. They are the true important beings that runs the blockchain. The process of our actions in our server are done by the witnesses.

They verify transactions. They keep it honest.

Voting for witness means election. Steemit designed an algorithm that lets the community decide who will process the transactions at first. In the current algorithm, the top 20 witnesses elected processes the transactions. They run servers to maintain a "3-second" transaction.

The point of voting for geniune witnesses is that we need to have dedicated witnesses that focus on developing and keeping the blockchain efficient and secure.

First let us first define what is a Steem Witness. To quote Steemit's FAQ:

>The Steem blockchain requires a set of people to create blocks and uses a consensus mechanism called delegated proof of stake, or DPOS. The community elects 'witnesses' to act as the network's block producers and governance body.

In other words, the main job of a witness is to find and produce blocks for the Steem blockchain. Blocks are like a permanent storage of records which cannot be altered or deleted after being created. Blocks are the foundation of the blockchain technology and without witnesses there will be no blocks that will be produced.

The thing though is that in Steem, Witnesses take turns finding/producing those blocks. The current mechanism allows the Top 20 witnesses to produce more blocks compared to other witnesses. Since they are the major reason for all the majority of blocks created, it is only logical that they also make major decisions about Steem.

And since they are responsible for major decisions on Steem, it is important to vote for Witnesses who you trust and have already done good to the overall of the blockchain. Just imagine a scenario where the top 20 witnesses are only focusing for their own personal gains, Steem would eventually collapse. That is why everyone should make sure that we are voting the right witnesses who will make the best decisions that will improve Steem.

However if you are asking here what you will be gaining for voting a witness, NONE really! It doesn't affect/give you anything. :)

Withnesses are one of the most valuable members of the Steem community, without whom the Steem blockchain wouldn't function. They are expected to run  a block-producing Steem node running 24/7/365 and  provide a correct ongoing price feed of the value of STEEM in US dollars, set the mininum Steem Power deposit to create an account, set the APR% for the Steem Dollar interest rate and many other things.

It's of crucial importance that you:

Because only if all, or at least most Steem users have handed out their withness votes can we assure that our top withnesses really are really the most trustworthy and valuble members of the community which have nothing other than the success of the Steem blockchain on their mind.

If you don't excercise your right to choose a withness, some that don't deserve to be ranking high on the withness list might get there.This is very important  as the top Steem withnesses make a huge amount of money and we wouldn't want to have someone that doesn't have the best interests of our community to be raking in so many rewards. Wouldn't we?

Its kind of like politics. If you agree with the politians views then you vote for them. If you like the way the witness engages with you then you should give them a vote.

Witnesses are the folks that keep the blockchain running smoothly.  Ideally, they have your interests at heart.  But if they don't, you have every right to find someone who does.  The most popular witnesses have reached that point by being the awesome people that they are, as well as providing value to the Steem blockchain.  People like @timcliff have made maintaining the Steem blockchain their entire career at this point.  That's a pretty awesome thing, when you think about it!

$0.26
Reply
RECOMMENDED
What is the purpose of joining musing.io?What are your views about libraries physical existence vanished day by day?What can you tell those folks that intend quitting their job for steemit?Has anyone here been burnt by btc when you bought it high at 20000?What are the things I required to carry(including medicines and accessories) to tackle issue like travel sickness if I am touring to another country?What do you think about Musing having a "conversations" feature?What's your take on the current value of STEEM and SBD and what do you stand to lose or gain if it depreciates or appreciates further?What if there will be no electricity in world?Most Often My Written Answers Disappears When Connectection Is Poor: How Do I Overcome This?Does it cost you voting power for upvoting old posts?