Everything has its upside and downside. If the upside is more as compared to downside then it is good to accept and adopt. In case of bots in steemit, there has been a lot of talk and noise around it, especially after steem crushing to 0.25 usd. Everyone started blaming bot system for steem value to have such a fate. But the same bot system was also there when steem hit an all time high of 8 usd and no body pointed finger at that time. So it is a natural behavior of human being to blame a system when it fails. But if this blame comes with a belongingness, then it can improve the system.

When the user finds the service of the bot in steemit

The user has an excellent post and he happily sent bid to the bot and received an upvote and made it to the trending page. Many people come across the blog and the author received applauds from many readers and curators. Many people commented and many other curators join and curated the post. So the best purpose of a bot system exhibited in this example. 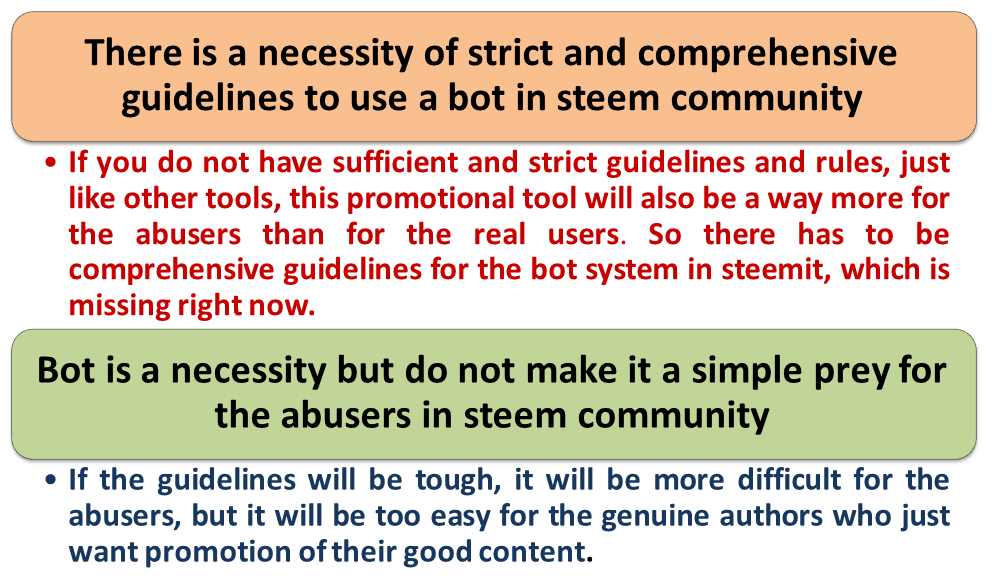 As there is no bot system, the user even after writing an excellent article did not find any service of bot nor any direct promotion tool to boost his post and bring it to the audience. Now as he does not have sufficient SP, his own worth is also very less. As there is no promotional tool available he can not bring his post to the trending page. His post despite being well written gets dumped and buried with so many other posts in steemit as the author could not able to bring it to the trending page.

Now from the above you can realize that there is need of promotional tool and bot system can fulfill this need. So we have to have the bot system. But wait. There are abusive actors also. Some people with malicious intentions are always there looking for opportunity to check the loopholes of the system & to abuse it for the personal benefit and to degrade the culture of the community.

So the point to buy from here is that if you do not have sufficient and strict guidelines and rules, just like other tools, this promotional tool will also be a way more for the abusers than for the real users. So there has to be comprehensive guidelines for the bot system in steemit, which is missing right now. Although individual renowned bot owners like minnowbooster, smartsteem and some others have their guidelines to fight spam and abuse of bot, there is no such universal guideline which is common for the entire community. Just like we have steemcleaners in steem community to fight spam and plagiarism, we need something comprehensive guidelines and etiquette to use a bot in steemit. That can solve the existing problem interface of bot system.

So many people have argued both for and against bots on the steemit platform. Some are saying that it's advantageous to the platform because it attracts investors and make them remain on the platform while some are saying that it kills creativity and attract only people that wants to reap from the system without giving much to it. Some are also saying that it kills the support system and make too many people to delegate most of their SP to such bots because the want to earn commission.

I think the disadvantages of bots surpasses it's advantages and it's use should be reduced drastically. Bots should not be introduced on weku because it would kill the creativity of the platform and make some people to want to game the system with lots of junk posts

$0.24
Reply
RECOMMENDED
Do you see yourself opening up a business of selling stuff through the Steemit blockchain?If today was the end of the world, how would you spend it?If steem goes to zero does that mean upvotes from users will not reflect any $ output on posts?CAN we trade Steem accounts ?Who Is Likely To Win The Next Presidential Election In Nigeria : Why?Some people are actually optimistic about Steem and believe that the price should be at 3.50 USD by now. What is your take on this? Do you think it's time to invest now that the price is low?What is the best way to break a relationship?Has anyone converted SBD for Steem using Steemworld.org?CAN we flag questions and answers on Musing.io?Do you even bother to check on your payout right now? What keeps you optimistic in the middle of this dip?