I have never been a great fan of outdoor games. I don't play as well as watch any outdoor games. I'm a huge fan of computer games. The gaming industry is really very huge now. Most of the interesting games have now been brought to the virtual world in the form of computer games. There are also some specific gaming devices that are exclusively available for gamer. From my childhood, I have been able to play so many computer games. During my childhood I used to wonder if I should take a profession where I become a game developer. During my college days I also got some contacts online of people who do beta testing of games and get paid for it. I really love to take up a profession that pays me for playing games. It is similar to a profession that pays for travelling around the world. Only people who have such interest will be able to understand that feeling.

I have seen so many friends who talk a lot about cricket and football. During such conversations I will not be having anything to contribute. But when it comes to computer games and that too some common games that I play, I really find it very comfortable and talk about it. I have spent lots of time in my life in playing so many computer games. Some games I have even played repeatedly multiple times.

I usually admire strategy games. I always feel that whatever I do in my life should add some value. Even while playing games, I choose games that add some value to me. Strategy games gives me good focus and out of box thinking capabilities as well. I mostly avoid games that are mere routines. If I have to do some tasks repeatedly again and again inside the game, I usually get bored and quit that game. I always expect a game that will make me think in different aspects and gives me so many possibilities.

The type of game that I choose is always rich in keeping me occupied to try out many patterns and possibilities. I avoid shooting games or fighting games as well. The reason is because I get saturated after playing for some time. If I'm playing games with my friends in multiplayer mode, it can go on for some time but if I play individually without any different things to do in the game, I easily get saturated. I also prefer playing RPG games where I decide what to do in the game instead of just blindly following the tasks given to me in the game.

Dota 2 is my game

Currently I have been playing Dota 2 for nearly 7 years. Initially I played this game like mad for more than 10 hours a day apart from my regular work life. I found a serious addiction to this game during the first 3 years when I played this game. I have spent more than 100 days of my life to play this game. The reason why it is interesting for me is because every Dota 2 game that I play makes me use different strategies and it also shows me victory and defeat in front of my eyes. If I win a game, I'm attracted towards winning again and again. If I lose a game, I'm attracted towards trying again to win the game. It kind of created a great addiction 4 years back. Then I realized that I'm spending way too much of time in playing this game and I stopped playing.

For the past one year I have again started playing the same game after I recently bough my new gaming laptop. Though there have been lots of changes in the past few years in the game, the strategy is still the same and it induces same addiction even now. But I'm a bit matured right now than before and I don't really spoil my valuable time by playing this game continuously. I only play when I really need some mind diversion and I don't get provoked by defeat and victories in the game. Now the situation is kind of stable so I don't mind playing the game now.

I have tried playing some of the other games in my mobile. I used to spend lots of time playing many strategy games in my mobile but I have gradually lost interest towards mobile games. I even tried playing pubg in my mobile but I stopped playing it because it is no way near Dota 2 in giving me the fun that I have right now. Once upon a time I used to enjoy a lot playing Age of Empires, Diablo and Hidden and Dangerous game in my pc. Today I get the same feeling when I play Dota 2 in my laptop.

Time I spend on games

I nearly spend around 1 to 2 hours every day playing games in my laptop. For now it is only dota 2 game. It used to be lots of other games earlier. I even used to play games in my mobile during my office break timings. But I have stopped playing like that. I just allocate some time of my day to play dota 2 game. That's all and I make sure my productivity is not affected because of playing games.

It might be shocking to most people, but I still actually play Winning Eleven game on my pc. I have the one where Ronaldo, the Brazilian is at his peak and Thiery Henry still runs the show. i haven't been able to give up my love for this game even after many years.

Well, i wasn't always privileged and so I started playing games late. I only played the game when i got into the University and my roommates were playing the game. I picked interest and soon became very good. The sad fact was that I couldn't afford a laptop and had to depend on whenever the owner of the laptop we used returned from class or wherever he goes. This was in 2012.

In 2014 when I got my first ever laptop, the very first thing I ensured to have was this game. I could have gone for higher but the specs of the laptop wouldn't allow for smooth gaming with games like pes (by the way, it's football or nothing for me). I would play this game for hours on end. it became like an addiction to me. Funny enough, the times when I played this game the most happened to be the time when my grades went up the most. So, play games more, right?

Well, its been four years since then and i am now agraduate but I still cannot get over this game. I was about playing it before I decided to answer some questions first. i play it for about two hours at the least everyday. It's the only game that occupies my time right now. I'm thinking of getting a PS4 but I can't tell how soon that will be, For now, it's me and my WInning Eleven Eight.

It is interesting, because my most favorite game nowadays is The Last Guardian (2016), but I didn't even played it, because it is a PS4 exclusive game, and I currently don't have (and never had so far) a PS4.

Monopoly: I enjoy playing monopoly a lot and it is a game I love most. It is a game where you use the play money to buy or trade properties. Your objective is that you try to put your opponents into bankruptcy.

I was taught this game by my uncle. I had been watching my uncle and his friends play the game when I was still a kid, so one day I decided playing it and discovered it was even more interesting than I actually thought.

It is a game for intellects. It also exposes one and enlarges the game. Getting players to have more insight on how to save money and investing on properties.

I have it on my PC, my mobile phone and the board game.

I actually spend like four hours daily playing it.

My advice to anyone who hasn't played it before is to check it out.

I simply love it. It's a game of wits and strategy. I play it everyday, sometimes for two or three hours

Unfortunately, this isn't the case as my friend has travelled for the holidays. I did get someone to play with yesterday though. However, he was unsure of himself so he didn't make a good competition.

I'm going to start seeking someone to play with for the holidays, pending my friend's return from his trip

I have lost the passion for playing games now, but before I was and addicted to one of the war games, "Point Blank" or better known as the PB abbreviation was once my favorite game.

War and skill in using weapons and target targets "Heat Shot" is an obligation to be able to do it, even sometimes spending several hundred thousand rupiah just to buy weapons, bulletproof and other war accesories.

But that's just the past, now I really don't have any more time left, I've been preoccupied with other activities, besides that I'm currently married, starting playing games when I have two children, I don't think it's a wise choice.

candy crush is a game that is mostly played on smartphones . Candy Crush Saga is a free game that is in form of a puzzle. the original candy crush was created by king games. i can literally play this game till my smartphone off. i have no definite hours.. let me just assume 12 hours at least. it is a very addictive game.

pes 2016  means pro evolution soccer edition 2016. is a soccer game . this game is mostly and notably played using a console. i could play this game for a period of 24 hours. it is very very interesting soccer game and also addictive with good graphics

I'm not a gamer, only have one game I like, it's called World Geography, which you can download for free from Play Store. 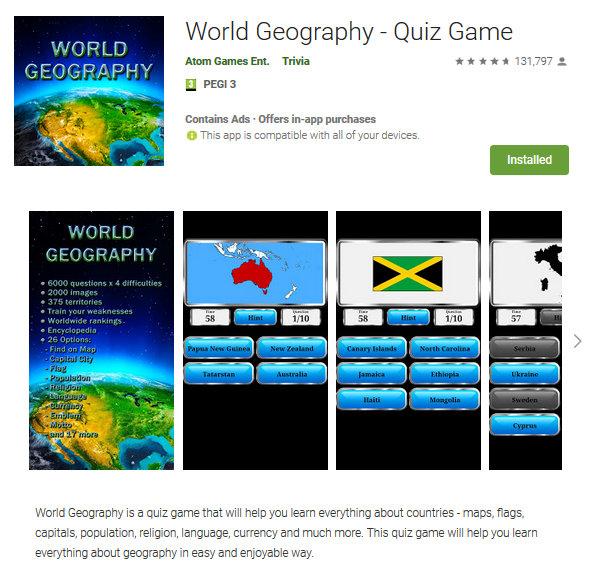 Unfortunately I can only play one game or max two a day, which means 100 questions per game. It's time consuming and now that Christmas is coming, there is no such thing as free time. I love the game because it helps me learn a lot. I love to travel and thanks to this game, now I know a lot more.

Dark Chroinicle, the best game ever made in my opinion, and Skyrim, a great game. It has been a while since I played Dark Chronicle because I need to connect my PS2 back up for it, but that game is addictibe in ebery way, in love with it. And in Skyrim you can roleplay, and I made a roleplaying rule in whish I now like playing Skyrim more and more, it makes it way more interesting.

My best game is soccer. Pes 2016 precisely, i can spend the whole day playing it without getting bored.

RECOMMENDED
If you have access to All your Financial Needs; What would you be doing: Lay back and do Nothing ?What Should be Done if Musing does not upvote all the questions and answers posted anymore?Why water has no colour?Is it just the bear market or projects need to have a serious look at their flawed tokenomics?Is it beneficial to eat superfoods during chemo?What relationship advice would you give to someone who is new to it?How to protect my startup ideas from being stolen?How can I retrieve the Keys for a Sub account created with steemconnect?Is it possible to send money from a paypal account to an account in normal $? If it's possible, how do you do that?Who is the most controversial scientist you know?