Yes i have a very good experience in selling my ETH in local etherum. I like the various options available in Localetherum. It is not just bank transfer you can choose, you can choose for a face to face cash deal, you can opt for other centralized payment system like paypal, skrill, paytm and many other options and you can also use international options, should you wish to deal with a person across the globe.

Last week I sold some etherum.  I sold my ETH and browsed the displayed list of available offers and clicked on the one that offered good rate, then it took me to the page where I could text with my counterpart and the conversation with my counterpart is end to end encrypted, so no one can see except me and my counterpart and that is how secured LocalEtherum is. Further after having a conversation with the counterpart, I could also see the escrow and sent the payment details over there and then the counterpart made the payment. Once I confirmed the receipt of payment, the escrow  released to the buyer. 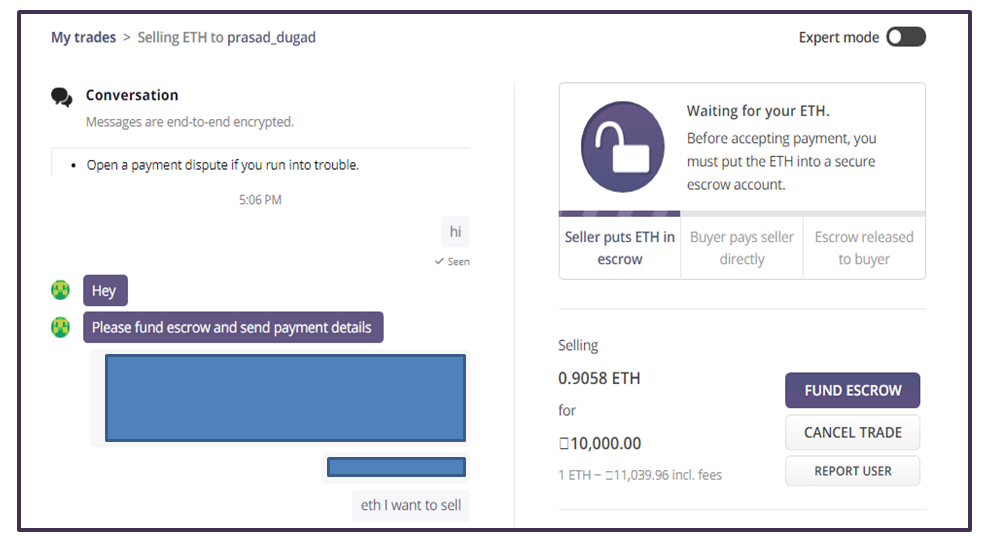 You can also notice a timeline When the trade was initiated, When the Escrow was funded, When it was finally released. If both the peers are prompt and proactive then a trade deal can be completed just within 3 to 5 mins.

There is an end-to-end message encryption between you and your counterpart and in no way the messages exchanged between two parties are stored in the LocalEtherum Server. Further after seven days time those messages are destroyed forever. In case of dispute only when the arbitrator from LocalEtherum joins to solve the matter, then only he can read the messages and that to after giving the keys to decrypt the messages. In this way it, enhances the privacy of the individual and the two parties make the deal in a most secured way.

Escrow Smart Contract is the main buying in LocalEtherum and it is the Escrow Smart contract which makes it a decentralized platform. It makes this system trustless and it only follows the logic of the deal between two parties and as per the logic only the locked fund is released to either of them.

The buyer and seller first agree to the terms of trade, then the seller locks his fund in the escrow smart contract and after the buyer send the payment outside LocalEtherum and confirms the same to the seller, the escrow fund is then released to the buyer. In case of a dispute, an arbitrator joins and decrypt those messages and verify the things and then the locked escrow is released to the rightful peer.

There is a 0.25% fees on the maker side and 0.75% fees on taker side. Market maker is the one who creates an offer and Market taker is the who respond to the offer.

$0.00
Reply
RECOMMENDED
If musing was not hear to educate and teach you through asking of questions and getting answer rendered to this question in time of doubt where would you go?What a student feels on the night before an Examination?What are the top rules of your life?How can blockchain technology be applied to insurance companies?Why it is so hard to find a love?Mozilla Firefox or Google Chrome, Which is the best browser for both smartphones and computers?When engaging with new people on a daily basis have you noticed that with some it's so easy and it comes naturally while with others is like moving mountains? Why does this happen?What keeps you returning to musing?What is the best invention of Nikola Tesla ?Why Bitcoin is banned in India?