Efforts are being made by the government in my country to make cities go cashless for most of the time. There has been laid different plans and also benefits tied to cash back offers are being provided so that people prefer using credit/debit cards as opposed to using cash.

Go cashless has its benefits like easy to track your financial transactions, more taxes to the government, low risk and no fraud, no need to worry about the change i.e. the small amounts which are in cents, crubs generation of black money, reduce the cost of operating for the banks and much more. 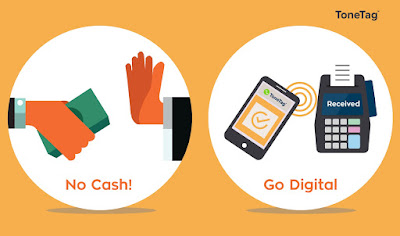 So overall I would say Yes my city in India is moving towards the cashless side and people here are adopting it at a very high pace because of ease to use and many offers that retailers are providing. Go digital go cashless has been the motto for quite some time here in my city.

I don't actually live in a city rather in a town, however, it's on its way to cityhood. Unfortunately, our town seems getting left out. You can rarely see an establishment where you can pay using your credit cards, etc. In a nearby city, some businesses do accept cards. In totality, cashless payment is only used mostly by privileged ones.

I am looking forward for the time when payment can be done through online wallets which includes crypto wallets. Along with my clique, I try my best to pay using coins.ph. I even paid friends just by swiping through he QR code. I hope establishments or businesses will be open to such possibilities.

There is a tendency, that's undeniable. Shops, supermarkets are required to have card readers, which is great, it's a step towards going cashless.

People need education in this matter. There is a certain layer of society that still needs to adapt to using banking. And there's a certain layer that will never adapt. Sad, but true. The older generation living in remote villages is used to cash and can't or don't want to adapt.

A denomination process took place in Romania in 2005, which meant cutting some zeros and simplifying everything. Some people (and unfortunately there are too many) are still using the old numbers, transforming everything in old money. There's been more than ten years since the denomination and they can't adapt to the new situation, don't want to change. These people most likely will never accept anything new. And this is just one example.

The younger generation can adapt immediately, there is not problem for them trying out everything that is new.

Having taken the above things into consideration, it's going to take a while, most likely the process will be longer.

We're getting there, yeah. Most places no longer accept cash if it's over a set amount (usually around $50 to $100) and digital currency means better record keeping all around. I would like it if we could pay with crypto wallets and the like, but I expect that's in the future just as people with credit cards in the early years llikely wished for more places to pay with cards and that has become the norm in most places.

It's also more efficient, just like places going paperless with your bills and such. If we're not printing and circulating paper or coin money then the resources dedicated to that can be put elsewhere as well and we're creating less waste.

We're getting close to it here in Singapore.

At the moment, most of the major retail stores can be paid credit cards, or apple pay...etc

It's actually good but If we really want to innovate the cashless payment, I hope to see cryptocurrencies that are being used for the usual puchases that we do in a normal basis.

We are slowly moving to a cashless society. Gone are the days where your wallet is full of notes, now you just have  a few cards and coins for tips.

Shops do like to get a certain amount in cash as they make money on giving cash back at the tills. card banking does have  a cost attached to it and is cheaper for them to take cash.

I do see in the future with all the phone apps and cards that cash will be very rare and non existent.

I am going cashless, I don't really care for the city.

Business owners are individuals, they can make their own choices.

As long as I can pay plastic at their place, I will use their service and goods.

I've been cashless for the most part of past 5 years.

Only really using cash if I have no other choice, and that would be if a terminal at a restaurant breaks.

I would not carry cash on me, so I would have to hit an ATM and withdraw just the amount I need.

It will take a while before my city will go cashless, people are still finding it hard to adopt to technology here, if you go around with your atm card hoping to pay with it you will end up going to the ATM to withdraw cash, as if it not network issues then they don't have a pos machine or theyve not find they way around other online payment. Although some supermarkets and other establiment are already adopting the cashless policy, they are just few in numbers.

RECOMMENDED
In your opinion which is more important-- loyalty to a nationality or loyalty to the human race ?What are good bid bots that accept steem instead of steemdollar?Is it unethical for a person to date his or her boss?If someone delegates a lot of "Steem Power" to you, what would you do with the Steem Power delegation? Will you help new users?Do you follow users based on the amount of Steem Power in their wallets?Do you agree that internet has made humans to become more lazy?I noticed recently some users flagging questions and answers around here, do they have something to do with musing, is there any logic behind their flags, does anybody know who are those users?What causes depression?I want to take delegated SP from minnowbooster's DLM market? I want to send steem to MB for that, what should I write in the memo?We have people running multiple accounts here, who are trying to drain the resources of this platform. What do you have to say to such people?