I do believe in ghosts and other supernatural things, and I actually find them really interesting.

Since I was young, I have been "gifted". Well, I haven't experienced any encounters for the last four to five years now. And yeah, I think it's a good thing. haha...

The first encounter I had with a ghost was when I was very young. I actually couldn't remember it, but my mom and my grandma reminded me about it. The story was like this...

A few days after my great grandma's death, my grandma, mama and I were in her room. My grandma stays in that room together with her mother because she had to take care of her and that time, my mama was talking with my grandma while I was playing near the bed. They wonder because I suddenly started smiling while waving my hands. When they asked me what I was doing, I just said, "Great grandma is smiling and saying goodbye."

When I was around high school, the said "gift" activated again. We were in my grandparents' house (father's side), I was watching TV late at night with my grandfather and my parents went to the room first. After watching the TV program, I went to our room and lay down beside my mother. I wasn't sleeping yet, when someone called my name. I thought it was my mama but when I looked at her, she was sound asleep. I told my grandpa about it the next day and he told me not to answer if someone calls me again.

In the same house, I and another cousin were washing the dishes after lunch in the dirty kitchen. On the left, there's a toilet and the door was just open. I and my cousin saw someone or maybe something went inside the toilet and we just thought it was another cousin of ours. When suddenly, our youngest cousin told us to go to the balcony after washing the  dishes because all our cousins are waiting there. I and the cousin washing the dishes with me, looked at each other. "Who's in the toilet?" We courageously checked the toilet only to find out that it was empty. We didn't see anyone or anything coming out, though. We told grandpa and other cousins about it... grandpa said we were just hallucinating, but when I and that other cousin were alone with him, he said... "Always go there by pairs or groups, and don't mention these things to your younger cousins."

When I became a University student, there are places in the University that I don't want to enter despite having a lot of people. Well, there are times when it's okay for me to go there alone but there are certain times that I dislike going there. It feels eerie and I get goosebumps.

The most vivid encounter I had was that of a little boy in the previous house where we used to rent. Actually, my cousin (she was still around 8 that time) asked my mom, "Why is there a little boy beside the window?" My mom couldn't see it. She asked my little cousin to describe it, and her description was the same as my description a couple months before my little cousin saw it.

What's funny is that whenever I encounter something be it visual, auditory or something else, there's always a history/story behind it. Actually, my grandpa was the same. He has encountered stuff in the past. I wonder if "gifts" like this can be passed down.

It's not only related to ghosts, but other stuff as well. So yeah, I have more interesting encounters, but my answer is already super long. I believe in the existence of ghosts. :) Their existence is kind of interesting for me.

When I was a kid I definitely believed in ghosts. I even thought that I saw a ghost on two separate occasions.

To this day, I don't have a rational explanation for what I saw however the sceptic in me has grown t a point where I no longer believe in any religion, the supernatural, or ghosts.

These days I only believe in the things that can be explained by science, or the things that I witness with my own eyes. And while I saw something that defies explanation as a child, it is quite possible that what I saw was a figment of my overactive imagination, or that I was still asleep when I saw the ghost the second time (I was in bed and thought that I was woken up by the ghost).

So, no. I don't believe in ghosts. There's no rational explanation for them and to believe in them would also require me to believe in an afterlife, which I don't.

I do not actually believe in ghosts in the past until my recent experience when i saw my late dad at a store in new'-york,,i was shocked when i saw him,i screamed "daddy",everyone around me were looking at me like i was mad because they could not see him but i was seeing him,before i could rush down to meet him he disappeared....as from that moment i am forced to start believing in ghosts....

I do not actually believe in ghosts and do not think i ever will,there are many ghost stories i have read and ghost movies that i have watched but i still have not seen any wonderful evidence to convince me that ghosts are real...

If ghosts are what we are made to believe in movies then i actually believe in ghosts because i have personally experienced those things though i find it strange and difficult to explain...but the fact is that i believe in ghosts to some certain extent..

No! I do not believe in ghosts because they do not exist. Thinking that ghosts do exist  nothing but a superstitious belief. 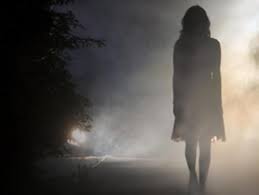 Not only do I believe, but I'm sure they exist. There have been many moments when I have seen them. The best thing is that it has not only been me, but other people have also seen them. I will tell you at least twice how many times I have seen them:

In 1999, on December 15, I graduated and decided to go on a trip with some friends. The trip had been planned in advance, so we tried to make sure that no detail was left out. The trip was to be made by four friends: three women and one man. We had our own car and on the day of the trip, we decided that we would go looking for everyone at home. When we were all in the car, we decided that we would make a stop to buy some sweets to eat on the way. When we arrived at a store that was left on the road, we got off and bought some things. As we were leaving, the saleswoman told us not to leave yet because one of our friends was in the bathroom. We told her that we were complete, that our friend was with us. She said that when we arrived, two men and three women got out of the car. We all told her that she was wrong and we left. On the way we were talking about the event and laughing at the saleswoman when suddenly one of the back doors opened. We were all cold because the locks were up and none of us had opened the door. With that we realized, that definitely, someone was traveling with us without realizing it.

On another occasion, I was already a teacher and I was reading a horror story with my students. Together with the boys, we discussed the existence of beings from beyond. When suddenly the door rang. I opened it and immediately a nurse appeared asking for Luis. I asked aloud who Luis was and what was looking for him. In the living room the boys said no one was called Luis, so I replied that there was no one by that name. The nurse thanked me and left. When I came in, the boys were scared because they said it was a ghost. When I looked out again, there was no one in the hallway. The nurse was gone!

I don't think we can deny things just because we don't believe in them. Life can surprise us with visions and presences that attest that we are not the only ones on this plane, that there are elements or soul wandering around looking for answers.

Most people believes that ghost exist, even my mum claimed that she had seen a ghost before when she was younger.

But I don't think they exist , because I'm yet to see one; until then, I do not believe in its existence.

It's just an imagination to those who claimed they had seen it .

Everything is based on whether you believe that we are spiritual beings that transcend after death, that we have several lives and even if there are several planes or dimensions, within this belief is believed in the "materialization" of souls that go through a a kind of stage between one life and the other, rooted in some feeling that holds it in a plane where its earthly life no longer exists, it is believed that many times these souls are left in a loop from which they can not leave.

Those who do not believe in life after earthly death or the different dimensions in general believe that ghosts are hallucinations or visions created in the brain of those who see them either out of fear or because they are very emotionally connected to someone who has already died.

YES, I do because God created ghosts on this planet, as humen exist in this planet same as ghosts exists. I have not much personal experience but I read in many books. So I can say that ghosts are exist, So what are you thinking?

Some peoples thought that they don't believe but If they read about the history of ghosts I am sure they will start believe. Ghosts are appeared in the night time when all humans are sleeping. When they start day, even you said our night at that time and ghost time are start when we all slept.

$0.00
Reply
RECOMMENDED
Are You always offended whenever your parents or supervisor reprimand you:Why Not?Why are some women more attracted to men with a partner than single men?Are Natural Forests Beneficial To Mankind; How?Does steem inc control the affairs of the steem blockchain? If so, can we really say that the steem blockchain is truly decentralised?Are Traditional Rullers (Monarchy) still relevant in this modern world; Would you want your King Dethroned?What is the best thing that happened to you in steemit?It is said that Love can make an individual extraordinary. Will Hatred likewise make an individual incredible?How we can avoid pregnancy during safe days without using any contraseptives?How valuable is a car to you:Would you buy any make and brand : Why?What is the most recurring excuse people give for refusal to acknowledge God; Could they be right?