I don't think it's a matter of what problems general A.I. can't solve but the problems the solutions would cause.

If a wealthy country gives free medicine to a poor country then the citizens of that poor country are healthier and that problem is solved. However, since those citizens are now healthier less people are dying and now there may be a food shortage problem of feeding more people that didn't exist before. Giving more food to the poor country helps but then the population gets older and the elderly will need resources.

Each time a problem is solved at least one new problem eventually arises.

The human mind by nature is complicated. One moment we are all about making logical and rational decisions and all of a sudden we suddenly shift to making decisions based on emotions and feelings. I just don't really think it is possible to make an AI based on that. Probably the best example I could give here is Love.

I for one AI could not just solve this problems. If a human can find an algorithm for this then an AI could probably too. But I for one think that it's just not possible.

This person you do not like? Yeah, the AI can not solve that. This person will be as boring as usual, except maybe she could also try to get bored with a fleet of AI drones.

The greed of humanity has been a problem since the beginning of time. Even if all the food, all the materials and simulations of SEX in virtual reality were available, some humans somewhere would want to covet your wife.

The stupidity of humanity continues to be a problem. Can the AI solve it? No. Because the AI can not solve the evolution. Take this picture, probably created by people who live with the internet, the Internet, space stations and autonomous cars.

They think, however, that the world is flat. 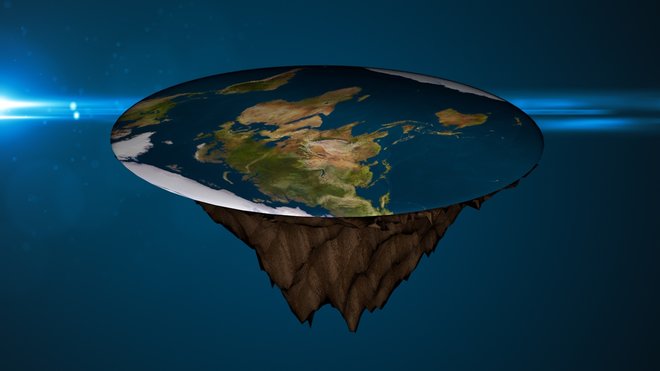 It's a bit ridiculous given all the observation sensors we have today.

Can the AI ​​eliminate stupidity? No. Because it's a mechanics of biological existence. Evolution does not know what is best, it only changes things and the most enduring, the luckiest and the best adapted will survive.

But changing something randomly, indiscriminately, results in either a positive direction or a negative direction. The fact that it is random also allows it to be any kind of stupidity. Unfortunately, this type of randomization is also a major benefit for humanity.

The chance of making a plethora of possibilities is that at least one of them will succeed. In addition, at least one of them is better than today. AI is not a panacea, intended to put an end to all undesirable situations. This is a borderline case of what maths can do.

Artificial Intelligence will be limited to certain things.

It won't be able to help with emotions or certain choices. A human has feelings and emotions and will have to feed the data required to the AI.

AI will develop as it is used more and more but will still be lacking in certain fields. A human will always have to be around to input info in order for it to function at the highest ability.

Understanding feelings is something that it will never do.

There’s a  great deal of concern over artificial intelligence; what it means for  our jobs, whether robots will one day replace us in the workplace,  whether it will one day lead to robot wars. But  current research projects show that artificial intelligence (AI) can  also be used for the greater good. Here are five global problems that  machine learning could help us solve.

I think ai cannot fully think like a human as it lacks neutrons and operates with sets of complex algorithms and speaking of that, what would it be like if it suddenly crashed. Would all those memories learn be deleted? I think it can't feel pain like how humans can feel.

It cannot bleed blood and also reproduce by using interxourse as i think it would be impossible to really feel it as a robot like how humans would. They would be making babies by fixing up different new parts to become a new artificial organism.

It would also not solve a humans lazy nature.

Most AI papers approach surely understood, essential issues with strategies generally like past techniques utilized on those issues. In some cases AI papers approach surely understood, critical issues with strategies that are atypical for those issues, and when it's great it's intriguing so a debt of gratitude is in order for your inquiry (I'm anticipating different answers).

End To End Optimized Image Compression, an ICLR 2017 paper, gives a very much propelled and amusing to peruse CNN detailing for pressure which performs obviously superior to normally utilized lossy techniques dependent on independently improved change (e.g. DCT for jpeg and wavelet for jpeg2000), quantization, and entropy coding steps. The thing I find most amazing about this is, for very lossy portrayals, the decoded pictures are obviously missing point of interest however without ancient rarities that appear the blame of the pressure calculation, for example, the blockiness of profoundly compacted jpegs . I ponder what sort of pragmatic circumstances there are the place you're willing to utilize lossy pressure AND sparing bits on pictures on your hard-drive and going over your system is essential enough for the critical increment in time and space necessities for encoding and deciphering.

RECOMMENDED
Nowadays, why don’t children respect their parents?What do think about the new Tether Scandal Accusation?What are the advantages that biofertilizers over chemical fertilizers? ?Which is better: Star Trek or Star Wars? Why??What technology will transform the world in 2020?Would you like to meet a version of yourself from a parallel universe/world? Would it bother you if that version was more wealthy or famous than you are in this universe?Do you think that if our parents kept fighting in a really violent manner would affect how the kids behave in the future?Do you have a goal for how many steemhunt HUNT tokens you want to get before the entire airdrop program ends?What is the worst thing that has ever been invented?Why are people are so obsessed with SOCIAL MEDIA that they have to post everything about their life?