A.  Positive impact of social media

1. The new way to increase friends

By using social media, we can communicate with anyone, even people we don't know even from various parts of the world. We can use these advantages to add insight, exchange ideas, get to know each other's culture and the characteristics of each region and others. This can also hone one's language skills. For example, learning English by utilizing a call or video call facility provided on social networking sites.

2. Makes it easy for us to promote a social action

For example, we can raise funds for disasters through Instagram, Twitter or Facebook. In addition to saving time, through social media, it will be known by all Indonesian people and even the world, with a record of those who have these accounts. This is very related to the benefits of computer networks that are increasingly widespread and felt by every user in promoting something, be it social or humanitarian campaigns. Of course this is a positive thing, to inform the public and people in various worlds to participate in the action.

3. As a means to develop skills and social

Sharpening technical and social skills is a requirement that must be fulfilled in order to survive and be in the balance sheet of competition in the modern era like today. This is very important, there is no age limit, everyone needs to develop.

4. It's easier to access information that is up to date

B. Negative impact of social media

The negative effects of social media on a person's behavior include:

Social networking sites like Facebook, Twitter, or others can also be dangerous because it triggers people to isolate themselves. Increasing self-isolation can change the way genes work, confusing immune responses, hormone levels, arterial function and damaging mental performance.

Often we hear of fraud through social media. There are also those who use it to promote prostitution online. Of course this has become the pros and cons of using social media. The importance of being aware of anything we will post on social media so as not to cause evil intentions later, such as kidnapping caused by Facebook, someone's reconnaissance to sexual abuse.

3. Disruption of developments in the social sphere

Humans are creatures that cannot live without the presence of other humans. This requires us to interact well with each other. If we are busy with social media, how will good interactions be established? The time we should use to meet face to face and chat, used up to surf in cyberspace.

5. Disrupting the health of the body

If our eyes look too often at the smartphone screen, it will cause serious problems. In addition, too long playing gadgets can cause stress to the brain. This of course will affect the health of the body. If the brain is stressed, the body will be susceptible to various diseases.

So the above explanation about the influence of social media on human life, I hope that what has been explained above can be useful for all of you and hopefully you will be even more wise in using social media.

Before social media: People interacts to each other in person.

Present: People are busy scrolling their feeds even at the presence of other person.

Present: People can show off anything they have by posting in social media.

These are not enough. There are more!

I think social media affect 90% of the way people behave this is not because people choose to be affected by it but because we are in a virtually interactive society where we see a lot of things on daily basis, the social media makes people more daring for example someone who may be timid or shy in real life maybe abusive and insultive on social media in the long run they will develop a certain kind of mentality however let's also take an instance of a person who dresses naked and post on social media they may go on to get alot of likes and approval of how beautiful they may look comma sometimes these feedback about how beautiful or how cool they are may influence them to develop an arrogant lifestyle in real life because of the virtual feedback they get on how they look , this will make them lose respect for people and they may feel a certain kind of superiority for people who they feel they are better looking than them.

Apart from behaviour in general is social media affect the way people talk, eat , communicate or even write texts to their friends or loved ones social media teaches people how to use short forms of typing and acronyms and as a result of these people apply to their real life endeavours allowing it to shape the way they do things in their working place or their schools sometimes people can even learn new dress sense or new makeup style from models that they see on places like instagram and most times the go ahead to copy this dress sense and I we need to control the way they look. Most of the trendy things we see real life we all being influenced by the social media so people are now being conformed to the social media allowing you to control their core self, their mentality and even their psychological mindset.

Well as a matter  of fact it really does. While it does have few different ways how a person acts and the affects are different as well.

While Social media does really acts as a plus point for many people and they have found the needs to be there and make something out of it from there. For instance for me it was a nice way to control or share my feelings on Social media like FB,Twitter, Instagram in the past and that way the appreciation form the others and the friendship kind of make me feel welcome and I did kind of liked it very much.

And that does really affects the real life behavior as well and by doing do our mind and body keeps fresh and we get more energy and mental support to do work in our daily life activities. 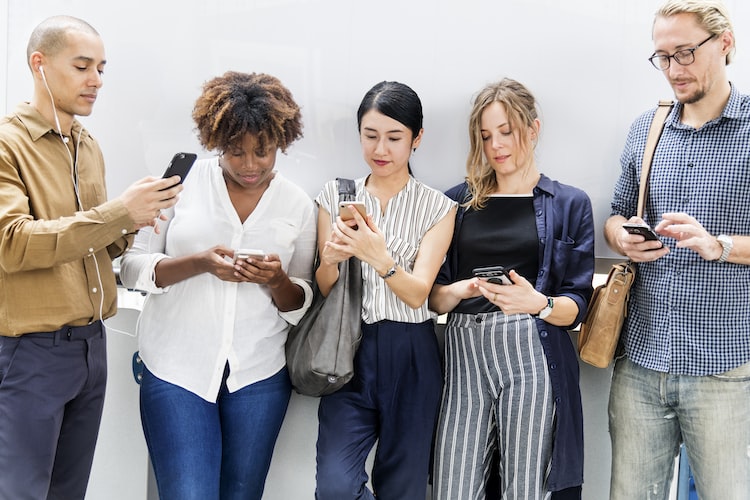 While I must add this up that Social media is sure bringing people who are far to us but is taking us far away from the people who we are close by.

While on the other hand, I have seen many people just waste their time in social media just by doing nothing and after spending the whole day they do get nothing in return by which they are getting lazy and addictive to social sites which is allowing them to live in the virtual world. At some point they even take ruthless decision on their life depending on the fact of Social life.

In another fact Social media has kind of changed the life of many people and in that way it did changed their way of attitude in their daily life.

So in my point of view I do believe that Social Media have a effect on us in certain ways.

I guess in a way it does. Social media has a kind of impact in our behaviours as humans. We do or say things we wouldn't normally do on social media. We may be happy on social media but in real life, we actually aren't. To me, social media kind of portrays a fake lifestyle for us.

I'm discussing how social media is affecting us

We are learning and learning from a lot of social media. Through this our behavior is affecting. The one who learns something good is behaving well.

We are seeing a lot of good things in social media. We're learning a lot of things. Which are affecting our behavior

$0.00
Reply
RECOMMENDED
Does your reputation score increase from curating?Is it that difficult to get upvotes from @musing? I see people doing tutorials on this now and I find it amusing.?What is the most narcissistic trait you've ever seen someone exhibit?What Proportion of The About 60000 Steemit Accounts Are Likely To View A Typical Post From An Account?Is entrepreneurship the best way to escape poverty?What’s the cause of accident?Which of the psychological defense mechanisms do you find most fascinating?Should i continue calling or i should keep my cool??What do you think about having multiple accounts on Steemit?Let's say there is enough daily "free" $1 upvote for all posters of Steemit, will it solve the issue of User retention? Will you stay and keep your daily posting?