Tip is a reward given by a customer or a client to the workmen for receiving service. When we go to a restaurant or higher a taxi, the waiters or the driver expect tips from us. Usually, one has to pay around 10% of the total bill amount to the waiters. It is considered a rude behavior if a waiter is not given tip.

Tipping is a normal thing in many parts of the world. Waiters, taxi drivers, pizza delivery boys expect tips from customers. They say that they don’t get enough from their employers. Tipping increase their earnings. They also say that tipping also encourage them to work efficiently.

In my view tipping should be banned or at least regulated. If a customer has already paid the bill price, including the taxes, why should he/she is overburdened then? It is the duty of the employer to pay his employees. If someone is not paying according to the laws, he should be punished. One cannot find inexpensive food in many restaurants. Restaurants and hotels charge their customers too much. Tipping add up the already overpriced bills. So, why a customer should bear a loss?

Apart from it, the amount of the tip is given in cash. It is not entered in account books. So, it creates black money. No tax is paid on this amount. It also encourages the employees to work on lesser salary as they think that they will make up it by receiving tips. Employers also know that their employees are getting tips, so they don’t like to hike their salary. So, it creates a system of exploitation.

It is the duty of the service providers to satisfy their customers. Should they not treat the customers properly if they don’t receive tip? Should they not perform their duty? Is tipping not equal to give someone alms? Is tipping not putting waiters, bartenders etc. in the category of beggars? I think it is against the human dignity to beg money and also it is derogatory to give someone money which is not the part of the bill. Tipping is like bribing people so that they may perform their duty.

In some countries service tax is levied with the bills. Taxation amount goes to the governments. Should government not care for the betterment of the people engaged in services? Are governments only to levy taxes and left people to live in miseries?

Tipping is not customary in some countries. In fact some people feel it disrespectful. In my opinion, it is the duty of the service provider to satisfy the customer. Employees should be paid properly by the employers and governments should also take care of the employees if it levies taxes. Customers should not be harassed in any condition if they are paying the full bill amount.

No not at all! If people aren't getting paid enough to live then why should it be my problem as the customer? The company has choices, such as to increase their prices, or to reduce their profit margins to pay their staff a better wage.

If nobody tipped anything then everyone would in essence have more money, which makes tipping a 'zero sum game' - e.g. no one really benefits from it if tipping is mandatory.

Anyway I would only really give a tip as a way of letting someone know they gave extra good service, or if the food I ate was exceptional. If tipping is mandatory then there is no real reason for customer service to go the extra mile and the level of customer service is probably lower as a result!

I think is some circumstances it should be, I'll explain why..

I work as a pizza delivery person, I only get paid by my employer £5 an hour, this is what the average pay for this job is in the UK, between £4 and £7 my boss then gives me £1 per delivery for fuel, but this is used for fuel so still I am only making £5 an hour.

A small tip adds up, as little as 50p builds up by every customer and if I do 30 deliveries I have made then £15 which then makes my wage £55 for the nights work, which is good for 7 hours.

But tips to me are an amazing bonus, tips pay for swimming lessons for my kids dance lessons and even clothes, if people stopped tipping I would be screwed and there would be no point in doing my job.

No one can live in the UK on £5 an hour so tips really do help :D

No. People say that employees do not get paid. First of all, it's not my problem, it's the employer's and employees' problem. Second, there is such a thing called minimum pay. Paying less than that is illegal. So stop wasting your time working in a place where you pay very little, and earn money demanding that place. And if they pay the legal, what a shame. A lot of people pay the same and without a tip. And sometimes they do much more difficult jobs.

I decide if I tip, and why. And consider this. What is the tip point? It's not about the employee, it's about the customer. The tip starts with an employee who does a good job, and the client, from himself, gives the tip. An act of kindness, a good employee, good quality. The whole meaning of tip is lost if it is obligatory. And not that not to tip one is bad people. Unlike. Normally a person does not tip. Someone pundiente and that is of that humor gives tip. I say this from experience. I have had times that I have had a lot of money and I have been in a mood that loose money very easy. I give money to anyone and even anything. 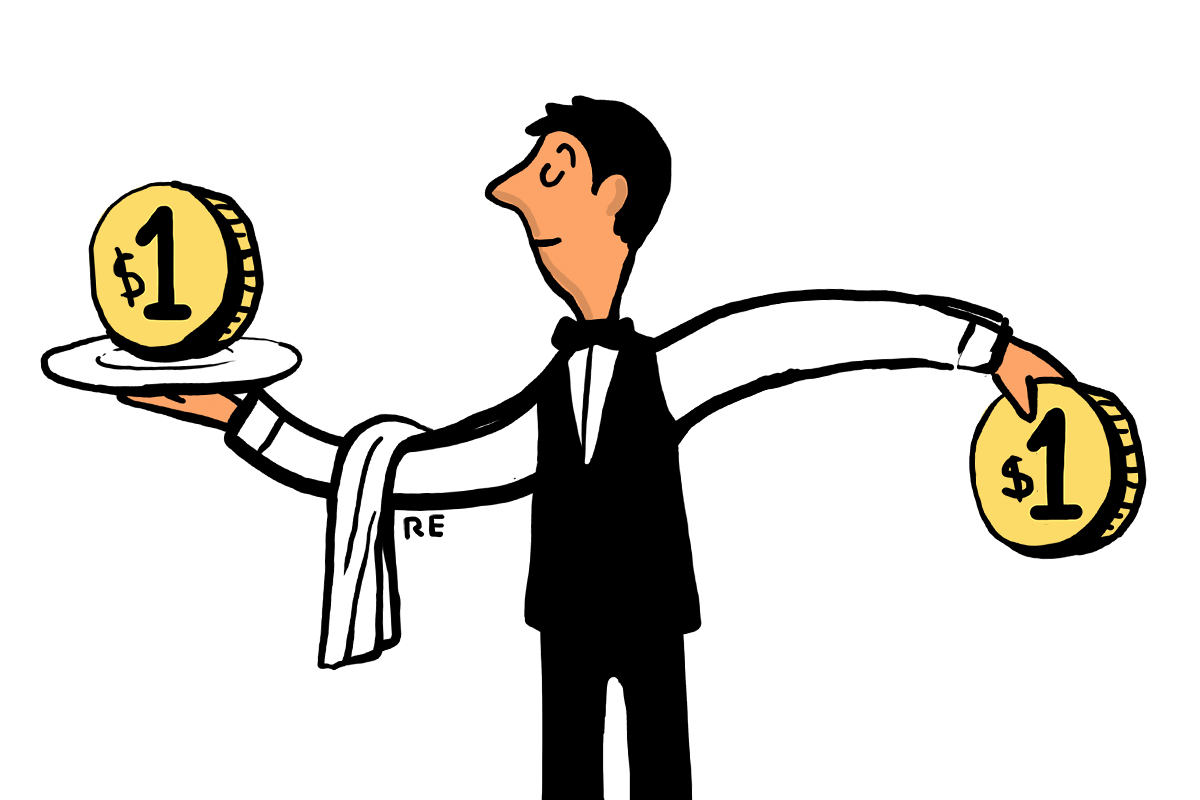 No I don't. If service was mandatory then what incentive is there for the waiter to  provide the best service possible.

When I go to a restaurant and receive terrible service i won't tip. If it is average and nothing special I will provide an average tip. If the service is excellent then they will be given more than the standard 10%.

Service and tips are all relative according to the whole experience the customer receives. I hate it when restaurants say that the tips are mandatory and then you have  a shocking meal and terrible service.

Top restaurants won't make it mandatory though as the waiters know that they can make more than the 10 percent. Average restaurants don't realize how important a waiter is as it could make or break the whole experience and one decides quite quickly if they would return again.

There are many restaurants that I have been to and won't return due to poor service. How many times I have received the wrong food and no apologies. The one time i refused to pay the mandatory tip when one person in our group wasn't even served food as they had forgotten to cook it. They eventually did but it was a major cock up.

I think that it is better if it is voluntary than mandatory.

Good service should really be part of the service not because there will be a tip. If the client was satisfied or happy with the service, he most probably think of tipping especially if he has money to tip. It is because there are some who just have enough money to pay the items or services, and knowing that there is a mandatory tip in a certain establishment could just lead to losing those clients that do not have some money to tip.

Also the employees should be properly paid by their employers and that their tips will be just their addional income, and not that they depends on it.

No. I say we do away with the "expected " tip and have employers actually pay a liveable wage instead of relying on the kindness of strangers.

$0.00
Reply
RECOMMENDED
WHY don't we have the "post to blog" option when posting a question on Musing.io ?Isn't this like the best time buy steem ?As a boss, how will you solve the office politics in your company?What are toxic people like?Steem is now 0.5 USD, Do you think musing should re-adjust voting percentage in curation?If one day everything went digital, do you think we would become super couch potatoes?WHAT are the Pros and Cons of posting our answers on Musing.io to Steem blog simultaneously?How much of your life are you willing to share online?Why is it so hard for us to say NO?We don't always win, So how do we handle losses?