Surprisingly that approach worked months ago! And here is the proof! XD

If you have been on Steem for almost a year now you might be familiar with some of the names below. This is the list of the Top 15 most followed Steem Accounts on the platform. 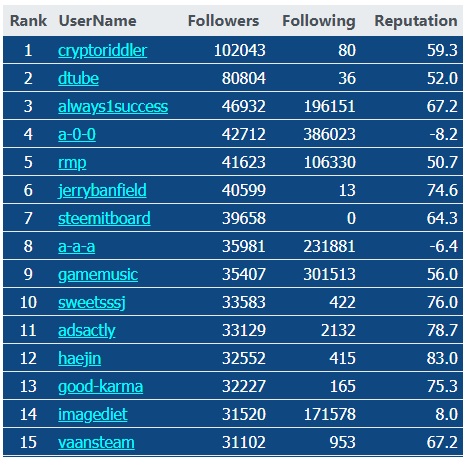 While the list above displays @cryptoriddler following only 80 accounts, he was one of the many accounts who followed ALL Steem accounts before Resource Credit was implemented. He auto-follow people and then unfollow them days after. He did that for months which surprisingly garnered him some followers eventually making him now the most followed account on Steem with over 100k+ followers.

Some of the accounts who copied that kind of approach like  @always1success, @a-0-0, @rmp, @a-a-a. @gamemusic as seen above have over 30k+ followers too. So I think before HF20 (Resource Credits), that approach worked!

With how people are picky with who they follow now, these approach no longer works. Also the only people who are still left on Steem with this market value are those who really believe on what this platform can do and will be in the years to come. I for one would not follow a likely bot account who is just hoping for a follow-back XD

If you're talking about following each other on steem, then NO.

Follows won't have any direct influence on your income. That is something important. Also those resteem services with "huge" reach (i.e. tens of thousands of dead accounts and bots) aren't worth a penny. Don't use them ;-)

$0.01
Reply
RECOMMENDED
What seems to matter less as you grow older?Is it true that people staying in rural areas or relatively more green environment do not suffer from cardiovascular diseases than the people living in urban and more polluted area ?What's your opinion on gay marriages ?How does video games affect the brain of a kid?Is Aloe poisonous for dogs?Which is better: to be a miner or a speculator?What game do you like the most and how many hours do you spend playing that game? Is communication also a factor to a healthy relationship?ARE there any websites where one can see the amount of STEEM, SP and SBD that an account hold over time?If i offered you 500sp at this point, what would you do with it?